Home » Events » Global Input-Output Tables: Tools for the analysis of the integration of Latin America with the world
Available in: EnglishEspañol

Global Input-Output Tables: Tools for the analysis of the integration of Latin America with the world

In order to complete the existing multiregional input-output (MRIO) tables in Latin American and Asia Pacific, the Economic Commission for Latin America and the Caribbean (ECLAC), together with the Economic and Social Commission for Asia and the Pacific (ESCAP) and the Asian Development Bank (ADB), assembled Global Input-Output Tables. These include input-output tables previously developed by those institutions: The MRIO by the Asian Development Bank, and the South American I-O Table for 2005, as well as the input-output tables for Latin America and the Caribbean set up for the years 2011 and 2014, all by ECLAC.

The new I-O tables constitute a valuable tool for the development of public policies and the promotion of global and regional value chains. They disaggregate the production across 20 sectors and cover 71 economies, plus the Rest of Latin America (ROLAC) and the Rest of the World. ROLAC includes Costa Rica, Dominican Republic, El Salvador, Guatemala, Honduras, Nicaragua and Panama.

In parallel, an I-O table for 2011 has been released that includes 25 sectors and 78 economies plus the Rest of the World. This table contains disaggregated data for all countries included in the Rest of Latin America and is consistent with the new I-O table by the Asian Development Bank, which considers 38 economic sectors. The files made public include a correlation table between the initiatives developed by the World Input-Output Database (WIOD), ECLAC and the ADB.

This new tool aims at deepening knowledge of inter-regional production networks, promoting the development of value chains, and contributing to the formulation of policies for increased integration between both regions.

Students, academics and public policy makers are invited to utilize this tool in studies, technical analyses and the design of indicators for improved decision-making. 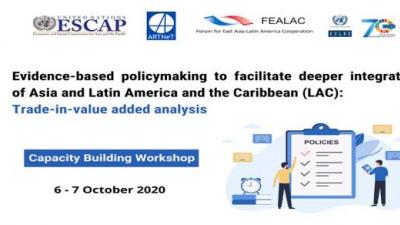