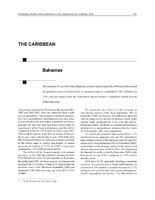 This document contains an analysis of and statistics on the economic performance of the region as a whole and of individual Latin American and Caribbean countries in 2003. As predicted by ECLAC in its midyear projections, the economy of Latin America and the Caribbean has grown by 1.5% in 2003. In contrast, the region's per capita GDP remained flat at 1.5% below the 1997 level. The lowest point of the cycle came in the first quarter of 2002, after which the economy began to make a mild recovery. The regional economy is expected to grow by 3.5% in 2004, leaving behind the lost" six-year period that went before, and gradually entering into an expansionary cycle. For the first time since 1997, there is no Latin American economy for which negative growth is projected. This brighter outlook is in part a reflection of the more favourable international environment. The reduction in sovereign risk ratings from their peak levels of September-October 2002, the improvement in raw material prices, the expansion of tourism and the beginnings of an upswing in non-oil exports to the United States are the main positive impulses coming from the international economy. The stronger domestic positions achieved by the countries of the region are also significant, however. After six years of turbulence, most of the countries are emerging with fiscal and monetary policies well in hand and with more competitive exchange rates; even the economies that were overtaken by severe crises have already started to pick up. The six years of negative per capita growth caused social damage that will take time to reverse. There are 20 million more poor Latin Americans in 2003 than there were in 1997. Unemployment (currently 10.7%) has increased by two percentage points during this period. It appears that the projected growth cycle will be stronger in those countries that have managed to reconcile improved economic governance with better political governance and weaker in those where the domestic political situation exhibits greater vulnerability. On the external front, the recovery of the world economy suffers from disequilibria that will have to be addressed primarily by the more developed economies. The Preliminary Overview is prepared every year by ECLAC's Economic Development Division in collaboration with the Statistics and Economic Projections Division, the ECLAC sub-regional offices in Mexico City and Port-of-Spain, and the ECLAC national offices in Bogota, Brasilia and Buenos Aires. It draws on statistical material provided by central banks and statistical offices of the countries in the region."