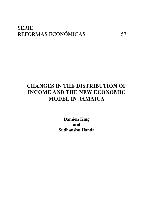 Introduction The last two decades have witnessed the implementation of liberal economic reforms throughout the developing world, but particularly in Latin American and the Caribbean. It is now a stylized fact of reform programs that income distribution worsens in the immediate aftermath of the implementation of such reforms (Cornia, et. al., 1987; Morley, 1995; Beccaria, 1998). In 11 of 14 Latin American countries included in his survey, Morely (1994) found that inequality had worsened in all but four of them during the 1980s when reform programs were implemented. In that regard, Jamaica has been a paradox. Handa and King (1997) date economic reform as taking place mostly since 1989. Throughout the 1990s, however, the income distribution has consistently narrowed, despite periods of both rising and falling poverty levels during this time. The decline in inequality in Jamaica is unusual for another reason as well. While economic growth may on occasion be accompanied by declining inequality, witness Brazil in the 1980s, the preponderance of evidence from the Latin American/Caribbean region suggests that inequality is strongly countercyclical (Psacharopolous, et al., 1997; Morley, 1994). During the 1980s, Argentina, Panama, and Venezuela all experienced increases in inequality while their per capita incomes fell, while Columbia and Costa Rica both had positive growth and declines in inequality (Psacharopolous, et. al., 1997).1 At the same time, there is no prior measured experience in the region of declining inequality in the presence of falling per capita income. The case of Jamaica, with just such an occurance in the period 1992 to 1996, therefore merits close scrutiny. The Jamaica experience can potentially reveal much about how the process of adjustment can affect income distribution. Are the distributional outcomes in Jamaica an accident of the particular circumstances of the adjustment, or are there lessons in the manner of adjustment that have implications for other reforming economies? The earliest published attempt to analyze the degree of income inequality in Jamaica (Ahiram, 1964), using data for 1958, concludes that Jamaica suffered a higher degree of income inequality than most developing countries with data available at the time.2 Ahiram reports a Gini of 53 percent for the distribution of household income and 57 percent for the distribution of individual income. Londoño and Székely (1997) report that, by 1970, Jamaica was characterized by one of the most equal distributions in the Latin American and Caribbean region, though the region tends to be more unequal than the remainder of the developing world. They report a Gini of 45.6 for 1970, which by 1989 had fallen marginally to 43.3. From the data reported below, in 1996 the Gini was down to 36.9. The purpose of this paper is to examine the distributional changes in Jamaica in order to explain the paradox of such a dramatic decline in inequality during and after a period of economic reform, and, after 1992, in the presence of macroeconomic stagnation. While the penchant for liberal economic reforms has shifted the focus away from issues of distribution, the concern in the literature and in this paper for inequality derives from two considerations. Ravallian (1997) has demonstrated that the growth elasticity of poverty is inversely correlated with the degree of inequality. Thus, as inequality increases, growth has a smaller impact on poverty reduction. A concern for absolute poverty therefore requires an interest in distribution to the extent that it informs the likelihood of poverty reduction. Moreover, the link between initial inequality and subsequent economic growth has been demonstrated (Deininger and Squire, 1998; Birdsall, et al., 1995). The remainder of the paper is organized as follows. Section 1 reviews the data on changes in the distribution of income that have occurred during the period. Section 2 summarizes the economic reform program and the macroeconomic context of the period under analysis, examining the extent to which the manner and pace of reform implementation explains the distributional outcomes. Section 3 attempts to explain the distributional outcomes in terms of the broader context of the policy framework and the consequential fluctuations of the macroeconomy.