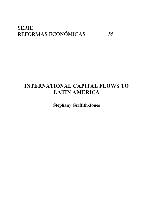 Summary
Capital flows returned to the Latin American in the 1990s after nearly a decade-long of the so-called debt crisis that featured a negative transfer of resources. These new capital flows were closely related to the economic reform process in the region. On the one hand, the reforms were a source of attraction for foreign investors. On the other hand, they helped the reforms succeed by relieving the external constraint that depressed growth during the 1980s.
Nevertheless, the new inflows also created problems. While average inflows in the 1990s were very similar to the amounts received before the debt crisis, their volatility was much greater. This volatility was the source of serious problems for the region, since the reversion of flows when investors lost confidence led to deep recessions.
Given this problem of volatility, foreign direct investment - which tends to be more stable as well as to be accompanied by other benefits, such as access to technology and markets - came to be particularly valued in recent years. This was in contrast to short-term portfolio flows, which embodied the volatility problem.It will be important in the future for governments and international bodies to design policies to limit the volatility of short-term flows and to encourage long-term capital.