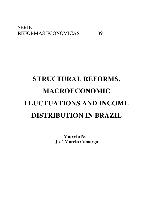 Abstract
This paper attempted to measure the evolution of income distribution and its determinants during the period of economic reforms. The paper was divided in two parts: in the first and main part of the paper, long-run relations between reforms and income distribution were explored. The second part of the paper explored relations between movements of distributive variables, on the one hand, and economic reforms and macroeconomic fluctuations, on the other.
First, we attempted to study the impact of the economic reforms on the riches. First, we assessed absolute income changes in the top 10% of the income distribution assessing how the composition of this group changed during the reform period. We also assessed how much of the changes in inequality observed between pre-reform and post-reform periods comes from changes at the 10% richest. While the absolute contribution of the 10% richest to total inequality is extremely high in Brazil, there is not much evidence to suggest that it has increased over the period of the reforms. In the 1990-93 period this contribution in the case of the economically active population has risen from 79.5 to 83.5 then fall to 81.7 in 1997. It is interesting to note that the peak of the series was found in 1976.
The second channel analyzed here is the skill-differential between the high school group and the rest of the labor force. One of the reasons why this breakdown is of interest is the evidence that growth is increasingly skill-intensive. The analysis of the profile of the 10% richest stresses the importance of general human capital explanatory power: 7.83% of the population has 12 or more years of education while the share of this group among the rich corresponds to 44% and 61% when one take into account the extension of the rich group income. This last statistic was 53% in 1990 which indicates a sharp effect of the reforms on the composition of the riches towards highly educated groups. In the period of reforms 1990-97, the rate of return to primary and secondary education levels falls while the rate of return on university degree rises steeply.
The third distributive channel emphasized here is the effect of stabilization on inequality measures, specially those operating through changes in the volatility of individual income. We used PME the micro-longitudinal aspect of PME in two alternative ways: first, the 4 consecutive observations of the same individuals were treated independently. The second way took earnings average across four months before inequality measures were calculated.
The main result obtained is that the post-stabilization fall of inequality measures is 2 to 4 times higher on a monthly basis that is traditionally used in Brazil than when one uses mean earnings across four months. Another way of looking at these effects of stabilization on inequality measures is to note that most of the fall of the inequality measures is attributed to the within groups component in the monthly inequality measures. Overall, the main point here is that most of the monthly earnings inequality fall observed after stabilization may be credited to a reduction of earnings volatility and not to a fall in permanent earnings inequality.