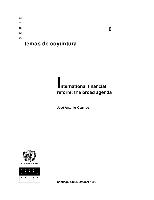 Abstract This paper argues that the agenda for international financial reform must be broadened in at least two senses. First of all, it should go beyond the issues of financial prevention and resolution, to those associated with development finance for poor and small countries, and to the ownership of economic and development policies by countries. Secondly, it should consider, in a systematic fashion, not only the role of world institutions but also of regional arrangements and the explicit definition of areas where national autonomy should be maintained. These issues should be tabled in a representative, balanced negotiation process, which should overcome some of the adverse political economy features that characterize the current debate. After some initial considerations of the nature of the problems that the current system faces and political economy issues, it considers: (1) the reforms associated to financial crisis prevention and resolution; (2) the role of development finance, including the use of multilateral development finance to support increased participation of low-income and small middle-income countries in private capital markets and the financing of social safety nets during crises; (3) the need to reach a renewed international agreement on the limits of conditionality and a full recognition of the central role of the "ownership" of development and macroeconomic policies by developing countries; (4) the role of regional and subregional institutions in increasing the supply of "global public goods" and other services in the area of international finance; and (5) the need to maintain several realms of national autonomy, including capital account regulations and the choice of exchange rate regimes. The paper argues that regional institutions and national autonomy are particularly important for the smaller players in the international arena, which will gain significantly from competition in the services provided to them and from the maintenance of freedom of action in a context of imperfect supply of global public goods.""