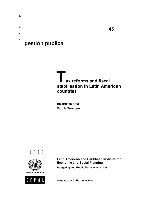 The fiscal burden in OECD (Organisation for Economic Co-operation and Development) countries more than doubles the overall taxation level in Latin American countries. In terms of revenue composition, OECD countries collect a larger share from direct taxes; there is also a greater component from social contributions. During the nineties, the revival of economic growth and the design of better tax systems enabled fiscal revenues to recover strongly, reaching an increase of 3 points of GDP (Gross Domestic Product). However, this effort has not been sufficient, considering the dynamics of public debt in an environment of high interest rates and low growth. In this paper, the main trends of tax burden and composition of tax revenues in Latin American countries are described, and then the short-term tax-gap, as OECD has defined it, are calculated for 18 countries. The reversal of economic cycle makes impossible to fill this gap in the short term without significant macroeconomic costs. Some room of manoeuvre, namely a cyclical safety margin, has to be considered. The magnitude of this cyclical safety margin is very significant, because of the volatility of output and the high value of tax elasticities, despite the relatively minor size of public sector when compared to OECD standards. If fiscal policy is more efficient when letting operate automatic stabilisers, then second generation" macro fiscal rules will have to address on the issue of the pronounced pro-cyclical bias that defined fiscal policies in the nineties in many Latin American countries."