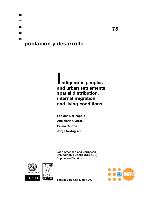 By processing Census micro data from 10 countries in the region, we answer several questions that can be categorized under the following three main topics: a) spatial distribution trends of indigenous peoples in Latin America, with emphasis on the urbanization process and the spatial pattern of this population within selected cities; b) internal migration of indigenous peoples, with emphasis on rural to urban flows; and c) living conditions of indigenous peoples, with emphasis on inequalities between urban and rural areas.Our results confirm both an increasing proportion of the indigenous population residing in urban areas and the propensity to settle in urban centres close to their home territory rather than in the big metropolises. Within cities, high concentrations of indigenous people are typically found in geographical areas that have higher than average poverty levels. Regarding the second topic we find indigenous people have strong incentives to migrate to cities, and the fact that they have been making that move in recent years will only serve to strengthen the networks that feed back into more migration. The downside is that indigenous peoples have lower socio-economic status in cities, the cost of living is higher than in their places of origin, and sometimes migrants suffer marginalization from their origin communities. Finally, our results on conventional indicators on education, health and access to basic services indicate that living conditions of urban indigenous people are more favourable than those of indigenous people in rural areas. Nevertheless, ethnic inequities in cities persist and in some cases are intensified, reflecting the discrimination and social exclusion that affect indigenous people who live in cities.