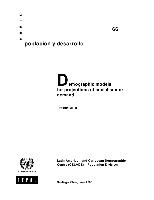 Abstract
This paper presents three demographic models useful for projections of social sector demand. The first model is a probabilistic national population forecast based on the collective experience of UN member states. It offers a set of probabilistic forecasts as a complement to the official UN scenario forecasts. The second model forecasts the population by age and educational level using data from a single census. Forecasts are presented for Chile which show dramatic changes in the educational composition of the elderly population and in the working-age population in the near future. These trends are likely to have important implications for reductions in poverty and future economic growth. The third model examines the effects of changes in population age structure on social sector demand. As an example, some likely effects of population aging on the Chilean government budget are examined. Each of the 3 models presented in this paper are based on relatively simple accounting frameworks.
Though simple, the models provide interesting insights into the future demography of countries and the economic and fiscal implications of these changes.