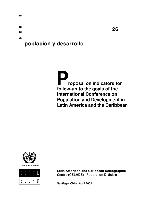 Summary
This document is intended to provide a frame of reference for the design and implementation of a system of indicators for use in following up on the goals agreed upon at the International Conference on Population and Development and set forth in the Latin American and Caribbean Regional Plan of Action on Population and Development.
One of the elements taken into consideration in this proposal is the sociodemographic diversity existing in the countries of the region, which makes it difficult to design a uniform system for monitoring progress towards the objectives of the Plan of Action. The Latin American and Caribbean countries are at differing stages in the demographic transition, which means that their age structures are very different as well. Consequently, the steps taken by the countries to fulfil the Plan of Action will be aimed at varying sectors of the population as national priorities change.
A system is proposed at the regional level for comparing the indicators with quantitative targets as a means of evaluating how much progress is being made and identifying socioeconomic or sociodemographic inequalities between different population groups.
This system would also provide background information for the design of social policies. The ultimate aim of the system is to serve as a basis for the development of national systems adapted to the circumstances existing in each country. To this end, a number of methodological aspects are discussed with a view to ensuring the system's operational usefulness (the need to set up a ranking system consistent with theobjectives of the different programmes, the need to adopt a typology geared to differing levels of evaluation and monitoring, etc.);.
The selection of these indicators was based on their fulfilment of a set of basic criteria (reliability, validity, sensitivity, etc.); and on the range of information available. Consideration was also given to the proposals made by a number of United Nations agencies as one of the outcomes of various conferences held during the 1990s.
Indicators were grouped into three priority areas which were defined in the post-Cairo evaluation conducted for Latin America and the Caribbean in 1998: population and public policy; gender equity, full equality of opportunity, and empowerment for women; and health and reproductive rights, family planning and family welfare. A description of each indicator has also been prepared which covers its definition, sources, quantitative objective if any, sociodemographic breakdown and relevant comments.