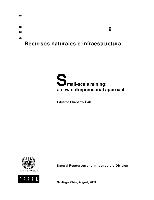 Summary In the second half of the twentieth century some of the Latin American countries suggested a system of stratification for mining activity, which was never actually applied, based on criteria such as the volume of production, the amount of capital invested and the number of workers involved in mineral extraction. One result of this stratification, which divided the industry into small-, medium- and large-scale mining, was that governments at different times implemented plans and programs in various areas, without any integrated planning between them; some related to the promotion of small-scale mining, or encouraged state investment in mega projects, while others sought to establish an appropriate climate to generate businesses that could obtain foreign investment for large-scale mining. While this process has been taking place, it has not been possible for a mining development policy to evolve that would attract large-scale national and foreign investment capital and promote the use of technology. What has been observed is the proliferation of forms of production of very poor technical quality, with few legal and financial tools, and a lack of systematic integration, particularly with respect to the lower scale of production referred to as small-scale mining. In order to conduct an impartial review of the concepts, and also the problems associated with these modalities in the mining industry, a new look must be taken at small- and medium-scale mining. The aim is to strengthen the business and management structure rather than the scale or volume of the operation as has been attempted in previous years.