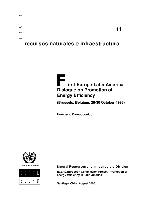 Abstract This report contains a recap of the presentations given by the speakers at the 'first Europe-Latin America Dialogue on Promotion of Energy Efficiency', held in Brussels from 28 to 30 October 1998. The event was organized within the framework of the 'promotion of Energy Efficiency in Latin America' Project, which is cofinanced by ECLAC, through its Natural Resources and Infrastructure Division, and the SYNERGY Programme of the European Commission's XVII Directorate-General of Energy. The project is under the direction of Fernando Sánchez Albavera, ECLAC Regional Adviser on Mining and Energy, and François Casana, head of the European Commission's SYNERGY Programme.The dialogue was sponsored by the European Parliament's Committee on Research, Technological Development and Energy and the European Union's Economic and Social Committee, as well as the European Energy Foundation. It falls within the overall context of the activities carried out under the ECLAC/European Commission Project and the statements issued at the conclusion of the Interparliamentary Conferences on Mining and Energy in Latin America (CIMEs 97 and 98), which stressed the importance of studying legislative measures to promote the sustainable development of the energy sector and called for a dialogue with the countries of the European Union on this subject.The objective of the meeting was to promote a dialogue among legislators, energy policy-makers, regulators, representatives of power companies, specialized agencies and experts from Europe and Latin America, so that they could share their experiences with legislative measures, regulatory mechanisms, and programmes to promote energy efficiency. In the first chapter, approaches to energy cooperation between Europe and Latin America are analysed. The second chapter takes a look at the development of energy policies in the European Union since the 1970s, with special emphasis on energy efficiency policies. In the third chapter, legislative measures and regulatory efforts adopted in the European Union are discussed, whereas the fourth chapter deals with the roles of the players involved, the programmes developed in the Member Countries at the Community level, and some important private initiatives. Chapter five analyses European experiences with energy efficiency services, and chapter six covers the progress that has been made in Latin America. The last chapter deals with ECLAC's course of action and conceptual approach with respect to the role of energy efficiency in the sustainable development of the energy sector.