Home » Publications » Does discourse matter in the politics of building social pacts on social protection?: international experiences
Available in: English

Does discourse matter in the politics of building social pacts on social protection?: international experiences 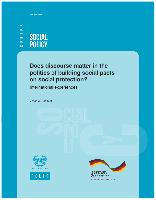 Discourse always matters in the politics of building social pacts on social protection —for failure as much as for success. And by discourse, we mean not just the ideas behind the social pacts but the policy debates and political discussions surrounding the negotiation of those pacts. Over the past three decades, with globalization a major driving force in the international economy, new social pacts have been negotiated and older ones renegotiated. Many of these negotiations have been underpinned by neoliberal ideas focused on increasing flexibility in labor markets through greater management ability to hire and fire at will, on improving worker productivity or reducing unemployment through labor market activation policies, and on cutting the costs of the welfare state through reducing benefits and introducing competition in services. But they have also been moderated by social-democratic and social liberal ideas emphasizing respect for workers' rights and job protections, the improvement of working hours, working conditions, and worker training, and the maintenance or enhancement of workers' benefits and social services over the lifecycle.

Towards a universal social protection model in...
Building consensus and establishing compacts in...
The Chilean system of contributory pensions as...
Social protection systems in Latin America and...