The collective memory and challenges of feminism 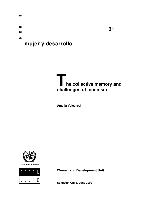 The collective memory and challenges of feminism

The work that appears in this publication was written by the philosopher Amelia Valcárcel and presented at the panel on Equity and Human Rights held in conjunction with the VIII Regional Conference on Women in Latin America and the Caribbean (Lima, Peru, 8-10 February 2000);. The collective memory and the challenges of feminism are reflected in the author's review of feminist political philosophy from the Enlightenment to the present day. She addresses the classic themes of equality and examines the sources that have given rise to much of the current contention between men and women.
This brief and disciplined text examines the process by which the feminism of the Enlightenment was able to formulate its demands at the political level; the relationship of feminism to the building of democracy and the conditions under which it was possible to bring about legislative and educational changes; the second wave, represented by suffragism, at the time of World War I; the third wave, in the 1970s, and the challenges for the new millennium.