Expenditures, investment and financing for sustainable development in Brazil 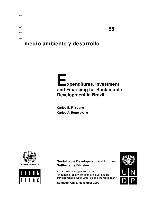 Expenditures, investment and financing for sustainable development in Brazil

The objective of this study is to examine the evolution and characteristics of the financing for the nvironment in Brazil, in order to identify the advances and retreats after the Rio 92 Conference. Brazil has a very decentralized administration, composed of three independent levels of public administration: the federal government, 27 state governments, and more than 5000 municipios," or municipalities; all of them with specific environmental institutions. However, at the time of the completion of this report, there were no indicators that aggregate information from these different institutional levels for the 1992-2001 period.(1) Thus, this study was a first effort to generate this kind of figures. Given the very short time for its completion, the main priority was to identify the resource flows from the federal government and some selected states. Efforts to estimate spending on pollution control and other environmental activities by the private sector were also made. In addition, the issue of funding sources is also discussed. Despite many methodological problems involved in the elaboration of these indicators, it was possible to identify trends and conclusions for environmental spending. At the federal government level, it was estimated that environmental expenditures were between 0.4% and 1% of the federal spending. Another important finding was that, although there was an official commitment to increase efforts in this area after the Rio 92 Conference, the overall federal government expenditures in environmental issues did not increase during the 1993-2000 period. Moreover, a matter of concern was the declining quality of this spending, with fewer resources directed to end-activities and more money diverted to means-expenditures. An important cause of this was the increasing share of debt related expenditures (interests and amortization) in the total budget. On the other hand, investments suffered cutbacks, particularly in the more recent period, and the expenditures in personnel fell systematically by 25% in constant prices during the second half of the nineties. Environmental projects are the most important single element in international cooperation agreements. However, the flow of foreign resources presented a declining trend since 1994, oscillating between 6% and 17% of total expenditures. Most of these resources come from external credit operations (loans), which means that in the long term, they represent an extra pressure of financial expenses in the budget. The proportion of international donations/total expenditures in 2000 fell to the lowest level in the series (2.0%), clearly indicating the decline of international support for environmental projects in Brazil. Results for the 1996-98 period show that, if sanitation costs are included (an overestimate since it also considers water supply), environmental expenditures are relatively more important for local governments: around 9% of the total public spending in the sample of municipios considered. State governments are in the second position, spending around 1.5% of their budget on environmental issues, in contrast to the less than 1% of the federal government. For this reason, there remains a clear need to generate better aggregate figures for the states and municipios for the whole period. The methodologies used for public budgeting and expenditure control vary widely, making it very hard to supply compatible aggregate numbers. In the three states where longer time series were estimated (São Paulo, Paraná and Rio Grande do Sul), there was no consistent trend of increasing expenditures on environmental objectives. Another gap that needs to be fulfilled refers to the private sector environmental spending. There were positive signals which indicated that the private sector is getting more concerned with the environmental issues, particularly those agents that have interests/responsibilities at the international level. It was calculated that the environmental spending of the industry sector was around R$ 160 million per year, slightly less than 1% of its value added. Although it is expected that this number will increase in the future, it is considerably lower than the public sector spending on environmental issues. It is very difficult to aggregate all these figures, but assuming for the year 2000 that the public spending on environmental issues was of 1.5% of the total, the public environmental spending would be of 0.33% of GDP, and an annual expenditure per capita of R$ 22.9 per capita (US$ 9.2 per capita). If the estimated industrial environmental spending (R$ 160 million) is added, the total spending becomes R$ 4.1 billion (0.34% of GDP), or R$ 23.9 per capita (US$ 9.6 per capita). Most of the funding for environmental projects comes from the government (mainly federal, through BNDES), international development agencies, or from companies' own resources. The private financial sector has a minor role on the financing of environmental expenditures but, gain, there are signals of positive changes, with the creation of innovative private funds specialized in environmentally friendly projects that combine financial and "green" interests as an example. The consolidation of economic instruments in international environmental agreements, particularly the Kyoto Protocol on greenhouse gases emissions, may accelerate this new financial market. Another potential source of funding for environmental projects is connected to the implementation of economic instruments in the environmental management system. Command-andcontrol procedures, such as licensing and emission standards, largely dominate the environmental regulation in Brazil. However, some interesting experiences, such as the "green" tax rebound (ICMS verde) and the recent changes in the water resources policy adopting the user/polluter-pays principle, indicate that the role of economic instruments will increase and, consequently, that there is potential for developing self-sustained financial mechanisms to sponsor environmental expenditures. (1) After the completion of this research, the Brazilian Institute of Geography and Statistics (IBGE) published estimates of public spending for the 1996-98 period (IBGE 2001). Whenever relevant, these figures were also added to the analysis, but with an alert that they were obtained using different methodological procedures."