Urban poverty and habitat precariousness in the Caribbean 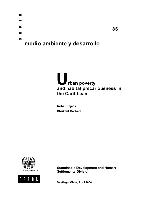 Urban poverty and habitat precariousness in the Caribbean

This report focuses on urban poverty and habitat precariousness in the Caribbean countries with an emphasis on current and former British territories.
Chapter 1 looks at the different sets of related indicators. Firstly, an overview of population growth and urbanization is presented. Next a synopsis of poverty indicators is given. Chapter 2 analyzes available information by countries mainly referred to habitat conditions such as housing, sanitation, land titles, water, public services, in order to present an evaluation of poverty conditions and precariousness in Caribbean urban areas. Preliminary profiles of informal settlement are given for three territories in which informal settlement is most prevalent in the region: Trinidad, Jamaica and Guyana. In certain sections, data is presented in categories such as 'most developed countries', 'less developed countries' and Eastern Caribbean Countries. Distinction is also made on the basis of economic ranking accorded to different countries by the World Bank and Caribbean Development Bank. Chapter 3 includes an analysis of land markets in the Caribbean countries, emphasizing on current and former British territories; their structure, evolution and tendencies and their impact on land access by poor families and on spatial exclusion. The document then evaluates different types of upgrading and land regularization programs and compares their operation in different countries, identifying impacts on poverty reduction, elements and conditions that determine successfulness, institutional responsibilities at different governmental levels and funds sources for program financing.
Finally, the authors develop guidelines to improve regularization policies in the Caribbean region. The smallness of most Caribbean territories dictates that for the most part both the analysis and the operational proposals should focus upon national level institutions rather than local bodies, including a review of institutional reforms related to the implementation of regularization programs in various territories of the region. But having in mind the potentialities at local level for managing programs, attention should also be given to the integration and relation of regularization with other programs of habitat development, in order to favor urban poverty reduction.