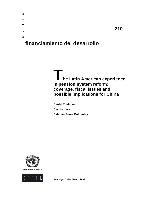 In the past two decades, Latin American countries reformed their pension systems focusing mainly on addressing the weaknesses of the contributory schemes - fiscal unsustainability, low coverage levels and a high degree of segmentation- and barely addressed the non-contributory element. The reform experiences show however that the intended reforms did not manage to meet their objectives. Firstly, to this day, a large proportion of the population remains inadequately covered by the contributory system. Secondly, the fiscal performance and outcome of the reform was worse than originally planned. The possibilities for the success of these reforms faced several constraints of a structural nature that are independent of the pension system itself and that as a result can not be overcome by a pension reform including mainly the limited savings capacity of some population groups and the instability and precariousness of the labor markets in the region. The Latin American experience shares similarities with that of China in terms of coverage, labor market informality. Both cases attest to the importance of combining contributory and non-contributory components in pension reform design.

Time for equality: closing gaps, opening trails...
A decade of social development in Latin America,...
Social Panorama of Latin America 2011
What kind of State? What kind of equality? XI...