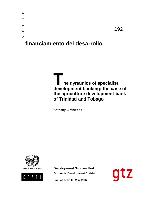 Introducción Internationally, development banks emerged as governments of many countries attempted to accelerate economic development by directing finance to achieve this objective.Accordingly, it was felt that development banks had a major role to play in steering resources appropriately, particularly where there is market failure. Thus, development banks were deemed as a critical ingredient to improving access to credit, allowing for the provisioning of long-term finance at a low price, and the financing of start-up activities. In addition, development banks were seen as essential to the financing of employment creating activities such as the development of the agricultural sector. Seibel (2000) examined the performances of agriculture development banks worldwide and found that they have suffered from political interference, have been largely unsupervised and therefore not subject to prudential regulations and strict monitoring. The author argued that in the majority of cases, these institutions became unsustainable, technically bankrupt, lacking the ability to diversify and attract customers and funding.The author further contended that successful reforms have encompassed operational autonomy, and have put in place legal provisions for prudential norms, focussing on financial viability. Seibel (2000) suggested that any successful reform on development banking needed to be done in a context of favourable demand conditions, and commitments to profitability and sustainability of operations. The study proposes to follow on from Seibel (2000) through the conduct of a case study. Accordingly, the primary focus of the study would be on the specialist development bank, Agriculture Development Bank (ADB). An examination of this bank is useful as the bank remained largely government owned (97%) and survived for nearly 40 years, with its financial position turning around from extreme losses to reflecting profitability. However, at times its operations would be compared with the Development Finance Limited (DFL), formally Development Finance Corporation, so as to make inferences on the relative performance of ADB. The next section examines the evolution and performance of development banking in Trinidad and Tobago, focussing in particular on ADB. It gives a brief sketch of the stylised facts, the broad financial system, the operational structure, the relevance of ADB, the scale of operations, the market penetration, the rebound of ADB and its relative performance to DFL. The study then goes on to explore the strategic focus of ADB in a bid to gain lessons on the way forward. Accordingly, the short and long-term focus of the institution are discussed, after which the institutional framework is highlighted and the governance and administrative scheme of the bank are closely examined. The issues regarding ADBs' ability to collect funds, and its autonomy are also explored. Following this, in the discussion preceding the conclusion, suggestions regarding the strengthening of financial intermediation by the bank and ways by which the specialist development banks can increase there viability are put forward.