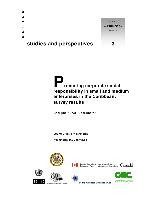 In November 2007, a three-day regional seminar to strengthen the competitiveness of CARICOM SMEs took place in Barbados with the aim of encouraging companies to incorporate CSR practices into their business strategy. The participants represented over 25 SMEs from Barbados, Jamaica, Guyana, St. Lucia and Trinidad and Tobago. During the workshop, the participants were introduced to Corporate Social Responsibility (CSR) tools and resources, as well as local case studies. On the last day of the workshop, the pilot survey was conducted using a draft of the CSR questionnaire applied here, in order to test the questionnaire as a suitable data collection instrument. Sixteen companies responded and minor adjustments were made to the final questionnaire. The minimum sample requirement put forward for this study was 365 companies proportionally distributed across the five pilot countries: Barbados, Guyana, Jamaica, St. Lucia and Trinidad & Tobago. The sample was subdivided in 3 or 4 industries per country, according to their economic relevance. This minimum sample size would satisfy the 95% confidence level and + 5 confidence interval or margin of error that is commonly accepted for such survey studies (Rivera, 2002; Shah, 2007). To meet this rigorous requirement, the survey had to gain responses from 5% of the total population of registered business establishments in the pilot countries and target industries (the total sample pool being 7,188 companies). In addition, the sample emphasizes the small and medium enterprise sector (SMEs) which have traditionally fallen behind in the CSR. Thus, the company sample required 287 SMEs, representing 80% of the total.After three months of surveying the response obtained, including the results of the pilot sample, this was 83% of the minimum required sample, or 305 companies. The proportional sample targets for Jamaica, Guyana, St. Lucia and Trinidad & Tobago were all met. The shortfall of 17% is attributed to the omission of results from Barbados. Despite the regional workshop in Barbados, the general survey was not applied in this country and thus this analysis only includes the results of the other four countries. Therefore, when the sample target of 76 companies for Barbados is removed, the survey achieved the desired sample size to ensure a 95% level of confidence in the results with a + 5% margin of error, which is standard for such studies. During the surveying process in Guyana, Jamaica, St. Lucia and Trinidad & Tobago, local surveyors reported many challenges. In all the countries, a common limitation was a lack of awareness, knowledge, or concern about CSR among the companies surveyed. Other limitations cited by surveyors included difficulty finding companies willing to cooperate due to time factors and concerns for company confidentiality . Although the head of the company was invited to respond to the questionnaire, other managerial staff was the ones actually responding and therefore lacked some of the answers requested in the survey. It has been a well documented experience of researchers collecting primary data in most developing countries that attaining more than a 5% response rate is overly ambitious. Furthermore, past research has also shown significant difficulty in obtaining high response rates from the SME sector. Since this group was heavily represented in the target sample of this study, the surveying exercise was particularly challenging. Growing interest in CSR around the world is placing increased pressure on companies worldwide, including those in the Caribbean region, to incorporate such concepts in order to compete effectively. Such pressures may be institutionally based coming from governments and regulators, or they may be derived from local communities and the non-governmental, activist sector. Furthermore, companies may also be motivated to improve CSR in order to catch up with market leaders or to mimic more successful competitors (Shah, 2007). Demand for CSR is being fueled by the increasing pace of firms worldwide in enhancing performance and by continued economic deregulation and trade reforms that are putting pressure on firms to improve their overall performance and respond to market demands and conditions. For example, non-compliance with international labor standards has the potential to be used as a barrier to export certain products, and simple compliance with national laws may not suffice. Firms in the region need to be aware of the standards to which they will be held accountable in today increasingly globalized market. A low level of CSR activity seems surprising considering the relatively high-income levels of the Caribbean countries and the numerous foreign firms that cater to Northern consumers in the tourism industry. While Caribbean CSR activity is not as high as in other parts of the hemisphere, strong movements exist to correct this, such as the ENACT environment program in Jamaica sponsored by the Canadian Government, and notable private sector driven initiatives in Trinidad & Tobago. This report presents a profile of the companies responding to the survey, and provides an analysis of the baseline CSR profile of the sample group. The report is divided into three sections, each providing a detailed analysis of each dimension of CSR - internal, external and environmental. The last two sections discuss the results and recommendations on the way forward for CSR in the Caribbean; particularly with respect to SMEs.