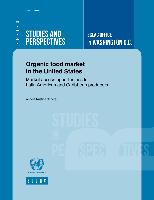 The organic food market in the United States has shown impressive growth rates since the passage of legislation to regulate the market in the early 2000s. Rapidly increasing consumer demand for organic products has led to significant organic market expansion, with double-digit annual sales growth rates for some product categories. The increasing demand to import certain organic products from international sources presents an interesting trade potential for exporters from Latin America and the Caribbean. In order to guard the integrity of the domestic organic market, the United States has determined specific rules for the certification and review of organic products and their production. International suppliers need to meet these standards in order to offer their products as "organic" in the United States, and to profit from price premiums reached due to consumers' belief in the high quality of organically produced food. No comprehensive data is available yet on international trade in organic food products, but since 2011, the United States has maintained a database that allows tracking the imports of selected organic commodities. The statistics indicate the importance of Latin American and Caribbean countries as suppliers for the United States organic food market, especially in the product categories of coffee, seasonal fruits, and vegetables. Current research suggests that local, national, and regional partnerships between public and private institutions that seek to strengthen the legislative framework of organic agriculture and capacity-building in exporting countries, increase foreign producers' chances of selling to this expanding agricultural niche market.