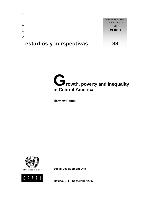 This study measures and analyses the household income growth performance of six countries in Central America between 1990 and 2004. Using national household surveys over the period, new empirical and methodological tools were employed to measure the growth in the incomes of the poor and provide an indication of some of the pertinent factors in the trends that occurred in the region. In particular the decomposition of the growth of poor incomes permitted an investigation of the relative contributions of economic growth and income redistribution. The results show that growth effects have been poverty reducing but redistribution effects have in many cases been poverty increasing. At the same time the results highlight the potential for the effects of redistribution of incomes away from the poor to hinder the continued alleviation of the absolute deprivation faced by half the population in the region. Further analysis showed that the inhibiting characteristics of the redistribution trends in Central America were due to a variety of structural inequalities in the social development of the countries of the region.