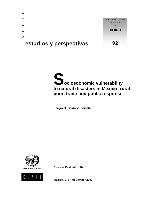 The increasing frequency and economic losses from natural disasters within the framework of decreasing agricultural prices is becoming crucial in increasing poverty in the Mexican rural economy. During the past two decades, the governmental withdrawal from supporting the agricultural sector with investments in physical, financial and logistic instruments continues to stress agricultural livelihoods, as current private mechanisms have not replaced them effectively. Natural disasters occurrence is increasingly producing severe damages to the so-called traditional agriculture, highly exposed to climatic events due to its predominating rainfed cropping practices as well as its high marginalization conditions, especially in the South of the country. Together, it tends to amplify the negative effects from extreme events. This process undermines farmers' incomes given their limitations to increase neither productivity nor cropping land, as well as their overall inability to re-orientate production. This document assesses public response to natural disasters in Mexico, including risk-sharing and loss-transfer instruments. It concludes with a set of policy suggestions to the public sector in order to maximize benefits from the existing governmental programs for adaptation to the increasing natural hazard exposure of the country.