Home » Publications » The Mexican film industry and its participation in the global value chain
Available in: EnglishEspañol 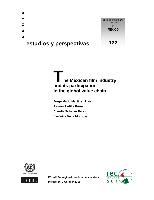 In Mexico, the service sector has become increasingly important both for gross national product and exports, and the film industry seems to be a relevant sector to explore in the effort to diversify export niches. This sector has a long and varied history, having become very prominent during certain periods (the Golden Age of the 1940s and 1950s) and less so in others, because of the various problems faced (for example between 1995 and 2005). The strengths and weaknesses experienced by the film industry throughout its existence can serve to orient future public policies. Mexico has important productive and creative capacities in the film industry that permit it to produce completely domestic films (domestic preproduction, production and post-production). Its proximity to the United States, the varied national scenery, and the skills of producers, directors, artists, and technicians with years of experience favor Mexico's insertion into certain niches of the international film production chain. Furthermore, Mexico is one of the largest markets in the world for film exhibition, although the Mexican film industry rarely takes advantage of this. Industry production is limited, however, by scant financing, major competition from Hollywood productions, the lack of joint initiatives and partnerships among members of the Mexican industry, weak legal regulation in the industry, the absence of integrated public policies to promote film production, and restrictions on distribution and internationalization. National infrastructure and technology capabilities, as well as training of personnel in new digital technologies, must be strengthened to achieve better results in the film industry. Other countries' experiences have shown that the Mexican film industry could have much greater potential. The dynamism of this sector on a global level, the potential for the creation of a large number of high-quality jobs, and the possibility of Mexico's integration into the global production chain with greater added value, should be strong incentives for solutions to be found to the problems that this industry is facing.