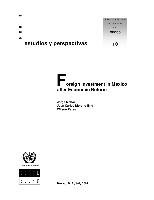 Introduction
Since the mid-1980s the Mexican economy has undergone a process
of deep economic reform designed to shift away from the more inward-oriented
development model that Mexico had followed until then. The main purpose of these
reforms was to privilege market mechanisms in economic activities, which meant
reducing the state's direct and indirect involvement in the economy. Some of
these economic reforms have been completed, some are still in process, and still
others - those that encountered opposition - have not yet, or have only
just, been implemented.
Economic liberalization had varying effects on the behavior of
economic actors and therefore on the evolution of various economic sectors and
the Mexican economy as a whole. Liberalizing reforms were intended to have a
strong impact on the investment process. Under the previous development model
- import-substitution industrialization (ISI); the state played a
fundamental role in directing investment; the reforms sought to shift that role
by placing greater emphasis on domestic and foreign private investment, while at
the same time orienting investment more toward exports and tradable activities
and less toward non-tradable sectors. The expectation was that, as the reform
process took its course and obstacles to free market operations were reduced,
investment decisions would increasingly be based on market signals, thus
increasing both efficiency in the use of the factors of production and the
potential for economic growth.
Mexico's liberalization process began in 1982, when collapsing
petroleum prices and rising international interest rates highlighted the economy's
vulnerability and the waning effectiveness of an importan import-substitution
model characterized by high levels of protectionism and strong state
participation. Those developments prompted the Mexican government to try to
modulate the impact of international economic shocks, and they also paved the
way for vigorous attempts to modify the country's development pattern.
Liberalizing reforms sought to convert the private sector into
the axis of economic growth, ideally making it able to operate competitively
(without subsidies); in world markets. The main elements of this reform process
included opening the domestic market to foreign trade, attracting foreign
investment, deregulating the economy, privatizing public enterprises, signing
the North American Free Trade Agreement (NAFTA);, and liberalizing financial
markets. (1); The reforms'goals have been bolstered by a governmental
commitment to continue stringent monetary and fiscal policies while eliminating
preferential lending.
These efforts, particularly by the late 1980s, transformed a
nearly closed economy into one that is highly open to foreign participation in
trade and investment. State involvement in the economy was curtailed sharply, as
shown by the downsizing of the public sector and the substitution of market
forces for state intervention in determining key variables such as interest
rates, nominal exchange rates, and prices of basic inputs.
In addition to their broad sweep and the speed with which they
were implemented, the reforms displayed two other interesting features. The
first is that they were largely accepted by key economic and political players.
That is, the shift toward trade liberalization, the elimination of subsidies,
and an expanded role for market forces in allocating funds did not encounter
strong opposition from those who had benefited from the prior system of
protection and subsidies, or from the workers and labor unions who were affected
by productive restructuring and new conditions in the labor market. Even the
currency crisis that erupted in December 1994 did not provoke a rejection of the
new development model. In fact, in dealing with the crisis, the administration
of President Ernesto Zedillo (1994-2000); reaffirmed its commitment to the reform
process and to orthodox management of fiscal and monetary policy. Moreover
Vicente Fox (2000-2006); - Mexico's first ever elected Presidential candidate
not nominated by the Partido Revolucionario Institucional (PRI); - has stated
his intention to extend the reform process.
The second feature concerns the reforms' impact on economic
growth. From 1983 to 1988, the Mexican economy was stagnant; from 1989 to 1994,
per capita gross domestic product (GDP); grew by only 0.8 percent a year on
average; and in 1995, more than ten years after the reform process was launched,
per capita GDP dropped 9 percent in real terms, its largest decline in sixty
years. The consensus among observers is that Mexico received an international
financial aid package and achieved a speedy, though moderate, economic recovery
in 1996-2000 largely thanks to the NAFTA, the productive apparatus's focus on
foreign markets, and appropriate fiscal policy-all central results of the
economic reform process. Despite the recovery, however, Mexico's economy has
yet to show the high and sustained growth rates required to generate sufficient
jobs to curb national unemployment and underemployment. Moreover, in 2001 Mexico's
GDP once again stalled, falling 0.1%.
The key role that capital formation plays in creating and
expanding productive capacities, incorporating technology, and raising
productivity makes it a fundamental factor in macroeconomic development. Yet
despite its importance, there is little information available on the sectoral
performance of capital formation in the Mexican economy. (2); In fact, empirical
studies of investment in specific sectors have lagged behind the theoretical
advances of recent years.
Against this background, this chapter analyzes the effect that
Mexico's liberalizing reforms have had on fixed capital formation at the
aggregate level and in the industrial sector. (3); The period under study begins
with the aftermath of the 1982 economic crisis and continues to 2000 and -
when data was available - to 2001. The following four sections review,
respectively, the behavior of aggregate investment and its relationship to the
growth process; (4); trends and performance of foreign direct investment (FDI);,
including the activities of in-bond processing plants (maquiladoras);; the
behavior and determining factors of investment in manufacturing; and the impact
of investment patterns on the manufacturing industry's structure and export
performance.

(1); Mexico's reforms are well documented; for an overview, see
Aspe 1993; Lustig 1998; Ros 1991.
(2); The available data on capital formation tend to be highly
aggregated.
(3); Commodity-producing sectors and public utility services are
not included in this study. For a general overview of investment in these
fields, see Máttar 2000. For the telecommunications sector, see Escobar de
Medécigo 1999; on the electrical power sector, Rodríguez 1999; on highways and
ports, Scheinvar 1999; and on the petroleum sector, Torres 1999.
(4); The section on the behavior of aggregate investment
partially draws on Máttar 2000 and the ones on investment in manufacturing, and
its impact on the industry's structure and export performance are based on
Moreno-Brid 1999.