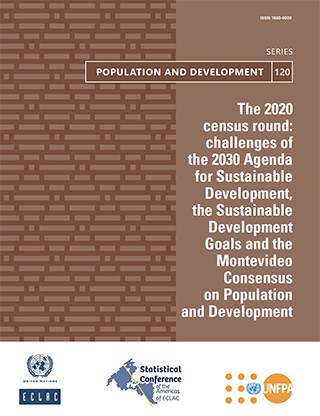 This document reports the recommendations made by the countries on the potential of the 2020 census round to measure the indicators of the agendas of the Sustainable Development Goals (SDGs) and the Montevideo Consensus on Population and Development.

An analytical proposal prepared by the Latin American and Caribbean Demographic Centre (CELADE) and the United Nations Population Fund (UNFPA) (as part of an activity of the Development Account Programme on Statistics and Data 2016-2019) was presented in Panama on 22–24 November 2016, through the Working Group on Censuses of the Statistical Conference of the Americas of the Economic Commission for Latin America and the Caribbean (SCA-ECLAC); and it was discussed in detail by the countries. The countries reviewed the conceptual and operational definitions assigned to each of the 50 indicators selected, based on previous census experiences and assumptions that would make it possible to measure them at the census source. The region is in a position to establish baselines from census data, and to evaluate the extent to which the countries have achieved the targets assumed by the two initiatives, particularly with a view towards 2030.

Abstract .-- Introduction .-- I. Development agendas: A2030 and MCPD .-- II. Censuses as basic sources for measuring indicators in the framework of the 2030 Agenda and the Montevideo Consensus .-- III. Working methodology .-- IV. Key issues for harmonizing indicators regionwide .-- V. General conclusions.