The public debate about agrobiotechnology in Latin American countries: comparative study of Argentina, Brazil and Mexico 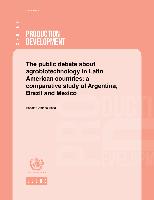 The public debate about agrobiotechnology in Latin American countries: comparative study of Argentina, Brazil and Mexico

This study is about the public discourse on the introduction of biotechnology in agriculture in three Latin American countries, Argentina, Brazil and Mexico. It aims at identifying the discoursive disputes to influence public opinion and thus to legitimize policy options regarding agrobiotechnology. Based on the assumption of the fundamental role of mass media in the public sphere of contemporary societies, the research draws on media analysis and the frame analysis of news articles to describe the political claims made by various actors attempting to frame shared meanings of GMOs. It addresses the questions: (1). How is agrobiotechnology depicted on the national media of these countries? (2) What are the main issues regarding GM crops that are being currently debated in these three different cases? (3) How are GMOs interpreted? (4) Which actors defend each type of argument? It is a descriptive work aimed at mapping and comparing the debates in the three countries, especially in what concern the participation of each frame and its main carriers. In addition to looking at similarities and differences among countries, the study identifies actors and frames that cross national borders in the interpretative disputes about a global issue: the adoption of biotechnology in agriculture.