The top 20 multinationals in Chile in 2010: retail, forestry and transport lead the international expansion 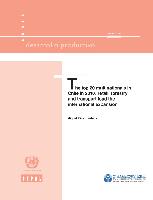 The top 20 multinationals in Chile in 2010: retail, forestry and transport lead the international expansion

This report presents the results of a survey of multinational enterprises (MNEs) from Chile, carried out by the United Nations Economic Commission for Latin America and the Caribbean (ECLAC) and the Vale Columbia Center on Sustainable International Investment (VCC), a joint undertaking of Columbia Law School and The Earth Institute at Columbia University in New York. The survey, conducted in 2011, covers the period 2009-2010 and was undertaken in the framework of the Emerging Markets Global Players (EMGP) project, an initiative of the VCC that brings together researchers from leading institutions in emerging markets to generate annual reports on the leading MNEs in each participating country.
The survey is also part of ECLAC’s ongoing monitoring of foreign direct investment (FDI) in Latin America and the Caribbean, including the rise of the translatin corporations, with the results regularly published in its report Foreign Direct Investment in Latin American and the Caribbean. The rise and expansion of transnational corporations from Latin America (translatins) have been documented and analysed by ECLAC in the annual series Foreign Direct Investment Report in Latin American and the Caribbean, which have been published continuously since 1997.