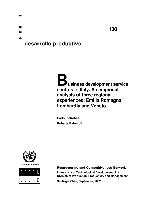 The notion of business development service (BDS) is quickly gaining popularity among policy makers and scholars of management, industrial organisation and development. Similarly, attention is increasingly paid on the institutions and centres offering BDS, as an essential part of the "local" or "regional innovation system". The notion that most clearly portrays the actual nature and function of these centres is that of providers of "real services", to indicate the impact those services have on structural features of company behaviour, and notably on their competitiveness. This paper analyses the experience of BDS centres in three highly developed Northern Italian regions (Emilia Romagna, Lombardia and Veneto) and evaluates their performance and contribution to the regions' industrial, and notably SME, development in light of its possible relevance for Latin American countries. The study is especially relevant as these centres have often been deemed responsible for the outstanding international competitiveness of Italian SMEs. Moreover, almost no detailed evaluations of these centres exist either in Italy or elsewhere, that go beyond the sole anecdotal evidence. The paper is based on a survey of thirty BDS centres in the three regions, which was carried out during 2001. It uses quantitative together with qualitative evidence as much as possible, in order to portray the details of a reality that is often quoted as a "success-story", sometimes beyond the actual empirical evidence. Furthermore, considerations on the evaluation of the performance of the BDS centres investigated are put forward. Finally, on the basis of the analysis, conclusions and implications for public policies are suggested, and the reasons for their public and subsidised provision are discussed. Useful lessons may be learned for countries at lower levels of industrial development, and specifically for Latin America. This document was prepared by Carlo Pietrobelli of the University of Rome III, Law School, Italy and Roberta Rabellotti, Department of Economics and Quantitative Methods, Università del Piemonte Orientale, Novara, Italy, who acts as consultant to the Industrial and Technological Development Unit of ECLAC, with the assistance of Tommaso Ciarli, in the context of the project on Small and medium-sized industrial enterprises in Latin America which is financed by the Government of Italy. The views expressed in this document, which has been distributed without formal editing, are those of the authors and do not necessarily reflect the views of the Organization.""