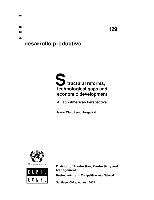 This paper explores the impact recent structural reforms have had on macro-to-micro linkages, as well as upon the pattern of production specialization, the entry and exit of firms during the adjustment process, and the sources of technical change in the present more open and de-regulated Latin American scenarios . Having described some of the above one final question emerges quite clearly: is the new "market-oriented" growth paradigm sustainable in the long run? The story hereby presented suggests that the present pattern of production specialization - strongly biased in favor of industries featuring low domestic knowledge generation and value added content - and the inhibition of local R&D and engineering activities resulting from the rapid expansion of internationally integrated production systems are pushing Latin American economies into a "low growth trap" from which it might turn up to be difficult to escape exclusively on the basis of free market principles. New institutions and new forms of public-to-private interaction in the field of technology generation and dissemination seem to be a sine qua non condition for faster productivity growth and for the improvement of international competitiveness. Both of these seem to be urgently needed if the long-term sustainability of recent structural reforms is to be maintained in the future.""