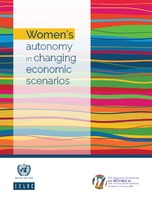 In the current regional context, progress towards the commitments set out in the Regional Gender Agenda and the 2030 Agenda must be accelerated as a matter of urgency, in order to face the many challenges posed by an economic scenario that is constantly changing due to economic, technological, demographic and climate changes. There is an international asymmetry among economic agents, in international trade, and in the capacity to innovate and generate new technologies, as well as between the main greenhouse-gas-emitting countries and those that are most vulnerable to the impacts of climate change. The region’s economy is growing less, while levels of inequality and poverty are increasing. This complicates the picture for social spending and, above all, policies that impact the lives of women. The persistence of the structural challenges of gender inequality requires governments to redouble their efforts to overcome them and honour their commitments in that regard.
The first part of this document evaluates the progress made towards achieving higher levels of gender equality and women’s autonomy. The second part analyses the processes of economic and financial globalization, the digital revolution, the care economy and climate change, and their main effects on women’s lives in a shifting economic context. By implementing public policies that are fit for purpose, these trends can offer a great opportunity to move towards a new development model that puts gender equality at the centre. However, inequality in the region is largely determined by the production structure and, if it is not modified, these changes could make it difficult to close gaps and could even lead to the emergence of new threats to equality between men and women.