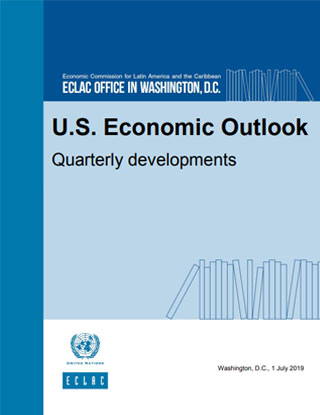 Highlights:
• In the first quarter of 2019, the U.S. economy grew at an above-trend annualized rate of 3.1%, despite the government shutdown and concerns about residual seasonality. Growth was driven by exports and a buildup in inventories.
• In May, U.S. employers added just 75,000 jobs, one of the smaller gains since the recession ended in mid-2009.
• U.S. consumer price inflation moderated in May, suggesting inflationary pressures remain muted. Over the last 12 months, the all items Consumer Price Index (CPI) rose 1.8%. The core CPI was up 2.0%.
• The U.S. current account deficit fell to US$ 130 billion in the first quarter of 2019 (2.5% of GDP), from US$ 144 billion in the fourth quarter. Despite the decline, the current account deficit in the first quarter of 2019 is the second largest of the past decade.
• The Federal Open Market Committee (FOMC) kept the target range for the fed funds rate steady but indicated in its statement that it could soon cut it to help sustain the economic expansion.
• Trade risks and the uncertainty they create have prompted predictions of Fed rate cuts in the second half of the year. While the U.S. economy is still growing at a relatively strong pace, with unemployment at record lows, escalating trade disputes have heightened concerns about a looming downturn.
• June marks the 10th anniversary since the end of the last recession. In July, the current expansion will become the longest on record.