Home » Publications » Innovation and SME internationalization in Korea and Latin America and the Caribbean: Policy experiences and areas for cooperation
Available in: English

Innovation and SME internationalization in Korea and Latin America and the Caribbean: Policy experiences and areas for cooperation 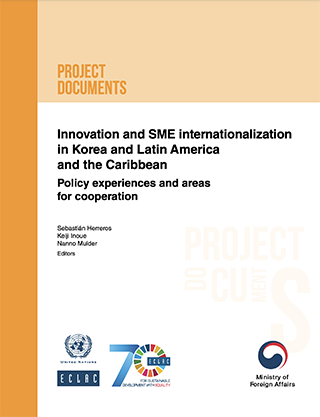 Economic relations between the Republic of Korea and Latin American and the Caribbean have expanded rapidly since 2000. Bilateral trade in goods increased more than fivefold, while the region has also become an important destination for Korean foreign direct investment. The region’s interest in Korea also stems from this country’s successful economic and social development experience, as it developed from being one of the poorest countries in the world to a high-income economy within less than six decades.
To better understand the divergent trends in Korea and the region, this document reviews the most important innovation and small and medium-sized enterprises (SMEs) internationalization policies in both in three sections. The first section looks at the role of Latin America within Korea’s trade and integration strategy. The second reviews policies from both partners related to science, technology, innovation and labor skills. The final section focuses on SME internationalization policies. These reviews are complemented by a synthesis of recent bilateral cooperation initiatives and suggestions to increase these ties further.