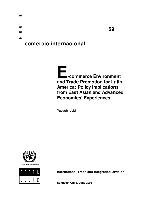 In the late of 1990s, when use of the Internet began to spread to almost all of the activities undertaken by people and businesses around the world, Internet-based electronic commerce was expected to introduce revolutionary innovations in businesses, management and international trade. In particular, information-sharing with clients and the clients of clients, and coordination of business activities with trade partners based on shared information, or the so-called supply chain management (SCM), were expected to be introduced by firms in order to dramatically reduce business costs and establish optimal supply chains. These production chains involve the procurement of materials for production, distribution, wholesale and retail, inventory management, and document and payment procedures. In addition, e-commerce was thought to provide opportunities for SMEs in accessing new clients and establishing new businesses. As a result of the burst of the dot-com bubble in many countries, interest in e-commerce and supply chain management (SCM) seems to have waned. A US-based SCM provider, Manugistics, announced a 5% decrease of total revenue for the second quarter of 2002 compared to the same period of the prior year. On the other hand, German SAP reported a slight improvement of sales for the third quarter of 2002 compared to the same period in 2001. For the quarter, revenues in the Europe, Middle East and Africa region increased 9% and in the Asia-Pacific region 4%, while those in the Americas region were down 4%. But companies, especially those in high-tech fields that faced a business decline, are likely to find a way out of the difficulty by applying information and communication technologies (ICTs) to cut costs and improve their business. Also, some companies that have invested in these systems in the past are reaching the stage of cultivating the fruits of the investments. For instance, NEC, whose PC business seems to be in red, began operating a new SCM system for their PC business in November 2002 to shorten the lead-time from sales planning to shipping to 4 days. The system is composed of two systems: a sales-side system which can estimate demands based on data such as volume of sales, inventory and seasonal variation, and a production-side system that is used for procurement of parts and production planning. The company invested about three billion yen (US 2.4 million) in the system and expects an annual 4 billion-yen return from the investment. In the United States, Toyota has been promoting a SCM project called 'monarch' since 2001. The company made available US$ 50 million to improve inventory control of repair parts and accessories. A part of the system has already been in operation since 2002. SAP holds the view that a number of leading high-tech companies are implementing SCMs to improve productivity, reduce inventories, and lower costs in order to maintain a competitive edge in the market, despite the drop of SAP's revenues in the United States reduced in the third quarter in 2002 as mentioned above. In contrast to these situations worldwide, IT decision-makers in Latin American firms showed little interest in SCMs in a survey conducted by IDC Latin America in October and November 2001, citing insufficient justification for the use of SCMs and lack of familiarity with its benefits as reasons. Less than 10% of the firms surveyed were using SCM software. On the other hand, Latin American countries are trying to strengthen economic relations not only with the United States but also with European and Asian countries by entering into free trade agreements (FTAs), and by intensifying foreign direct investment and other entrepreneurial arrangements. In these changing economic conditions, can Latin American firms gain benefits from international trade or establish long-term business connections without Internet-based connectivity to their highly computerized trading partners? In addition, in the midst of declining prices of commodities and labor-intensive products, and of global competition, can firms in Latin America maintain sound management without introducing information systems? It is difficult to answer these questions adequately, but the experiences of multinational companies (MNCs), which are a history of battles with these issues and computerization, will provide some lessons. This paper aims to provide information on the recent experiments regarding the introduction of e-commerce and SCMs and to derive implications for business and policy makers in Latin America from experiences in East and Southeast Asia. In the first chapter, the concept of SCMs and e-commerce will be summarized. In addition, some practical problems faced by firms and the possibility of governments' roles will be mentioned. The subsequent four chapters provide comparative analyses and case studies. In the last chapter, conclusions including policy implementations will be derived.""