Home » Publications » Preliminary overview of the economies of the Caribbean 2016-2017
Available in: English

Preliminary overview of the economies of the Caribbean 2016-2017 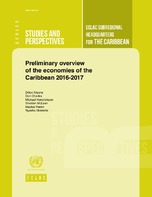 The Preliminary Overview of the Economies of the Caribbean analyzes in its 2016-2017 edition the economic performance of the region throughout 2016, the international context and macroeconomic policies implemented by countries, while also providing an outlook for 2017. The Caribbean recorded economic growth of only 0.8 per cent in 2016 but growth is expected to rebound to 2.4 per cent in 2017. The poor performance observed in 2016 was primarily due to a 3.7 percent contraction in the goods producing economies, which were hard hit by the decline in commodity prices in general and hydrocarbons in particular.