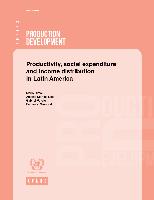 This paper discusses the role of institutions and structural change in shaping income inequality. It is argued that while social expenditure and direct redistribution are crucial for improving income distribution, sustainable equality requires structural change to create decent jobs. The relative importance of these variables in different countries is analyzed and a typology suggested. It is argued that the most equal countries in the world combine strong institutions in favor of redistribution and knowledge-intensive production structures that sustain growth and employment in the long run. Both institutions and the production structure in Latin America fail to foster equality and this explains its extremely high levels of inequality. The last decade witnessed significant advances in reducing inequality in Latin America, but these advances are threatened by slow productivity growth and weak structural change.