Population ageing in the Caribbean: An inventory of policies, programmes and future challenges 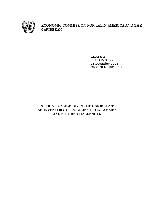 Population ageing in the Caribbean: An inventory of policies, programmes and future challenges

“We must be fully aware that while the developed countries became rich before they became old,
the developing countries will become old before they become rich”. This statement made by Gro Harlem
Brundtland, World Health Organization (WHO) Director-General, at the World Assembly on Ageing in
2002 in Madrid, reflects the challenges that the developing world is facing in the twentieth century.
Population ageing is a global phenomenon, which is having and will have major implications on
all aspects of human life in every society. This process is enduring and irreversible, as observed from
differing patterns and distinct paces in various regions and countries all over the world. The United
Nations has undertaken various efforts to repeatedly draw governments’ attention to the growing demand
for answers to these encompassing and profound demographic changes. Various initiatives on the global
as well as on the regional and subregional level have been undertaken to highlight the pressing need for
concerted action. Of importance in this regard are the numerous agreements reached at the global
conferences on social development, population and women orchestrated by the United Nations in the
1990s, which all refer to ageing as an issue of particular concern. The year 1999 was proclaimed by the
General Assembly1 of the United Nations as the Year of Older Persons to recognize ageing as one of the
major achievements but, at the same time, as one of the major challenges all populations have to cope
with in the twentieth century. This continuous call for action culminated in the Second World Assembly
on Ageing, which was held in Madrid 2002, where governments agreed to the implementation of a global
action plan. This new Plan of Action focuses both on political priorities such as improvements in living
conditions of older persons, combating poverty, social inclusion, individual self-fulfilment, human rights
and gender equality. To an increasing degree attention is also devoted to such holistic and overarching
themes as intergenerational solidarity, employment, social security, health and well-being. Mandated by
the Second World Assembly on Ageing, the Population Division of the Economic Commission for Latin
America and the Caribbean (ECLAC/CELADE) has convened the Regional Intergovernmental
Conference on Ageing in November 2003 in Santiago, where a regional strategy for the implementation
(ECLAC, 2003b) of the commitments reached in Madrid has been adopted. Further, a background
document (ECLAC 2003a) on the situation of the elderly in the Latin American and Caribbean region, of
which this document is a substantive part, has been presented to the meeting. Participating government
officials formally committed themselves to work on a national follow-up strategy and to report on the
progress made in the implementation of their commitments to the Ad hoc Committee on Population and
Development to be convened in 2004.