Development of a modelling framework in support of an assessment of the economic and social impacts of climate change in the Caribbean: the ECLAC – CIAM Model 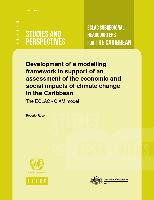 Development of a modelling framework in support of an assessment of the economic and social impacts of climate change in the Caribbean: the ECLAC – CIAM Model

The Caribbean region remains highly vulnerable to the impacts of climate change. In order to assess the social and economic consequences of climate change for the region, the Economic Commission for Latin America and the Caribbean( ECLAC) has developed a model for this purpose. The model is referred to as the Climate Impact Assessment Model (ECLAC-CIAM) and is a tool that can simultaneously assess multiple sectoral climate impacts specific to the Caribbean as a whole and for individual countries. To achieve this goal, an Integrated Assessment Model (IAM) with a Computable General Equilibrium Core was developed comprising of three modules to be executed sequentially. The first of these modules defines the type and magnitude of economic shocks on the basis of a climate change scenario, the second module is a global Computable General Equilibrium model with a special regional and industrial classification and the third module processes the output of the CGE model to get more disaggregated results. The model has the potential to produce several economic estimates but the current default results include percentage change in real national income for individual Caribbean states which provides a simple measure of welfare impacts. With some modifications, the model can also be used to consider the effects of single sectoral shocks such as (Land, Labour, Capital and Tourism) on the percentage change in real national income. Ultimately, the model is envisioned as an evolving tool for assessing the impact of climate change in the Caribbean and as a guide to policy responses with respect to adaptation strategies.