Home » Publications » The employment situation in Latin America and the Caribbean: Crisis and the labour market
Available in: EnglishEspañol

The employment situation in Latin America and the Caribbean: Crisis and the labour market 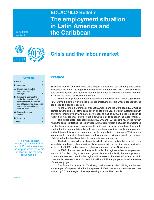 Since the financial and economic crisis began to affect the real economy and spread
throughout the world, the region’s economies have been faced with a situation where
data on employment and labour reflect the real stories of millions of women and men
for whom the future has become uncertain.
When these problems began to appear, the International Labour Organization
(ILO) warned that the world faced a global employment crisis whose consequences
could lead to a social recession.
As the Economic Commission for Latin America and the Caribbean (ECLAC) has
pointed out, the outbreak of the crisis put an end to a five-year period of sustained growth
and falling unemployment. As early as the second half of 2008, the figures began to
reflect slowing economic growth, while a downward slide began in the labour market.
This initial bulletin, produced jointly by ECLAC and ILO, seeks to review the ways in
which the crisis is affecting the region’s labour markets. Amidst a situation characterized
by shocks and uncertainty, governments and social partners must have the inputs
needed for designing public policies to increase the population’s levels of employment
and well-being. It is planned to produce two further bulletins by January 2010, in order
to measure the impact of the crisis on employment and provide an input to the process
of defining the best public policies to reverse its consequences.
The bulletin reviews the most recent available indicators and analyses them in order
to establish trends and detect variations. It provides statistics for the first quarter, estimates
for the rest of 2009, and a review of policies announced by the Governments.
In 2008, the last year of the growth cycle, the region’s urban unemployment
stood at 7.5%. According to economic growth forecasts for 2009, the average annual
urban unemployment rate for the region will increase to between 8.7% and 9.1%; in
other words, between 2.8 million and 3.9 million additional people will swell the ranks
of the unemployed.
Data for the first quarter of 2009 already confirm that the crisis is hitting employment
in the region. Compared with the first quarter of 2008, the urban unemployment rate
was up by 0.6 percentage points, representing over a million people.Work will continue until September 2009 on the preparation of a new report on the employment situation, using
data updated to the first half of 2009. This will provide a picture of the region’s employment situation, so that growth and
employment projections can be adjusted for 2009 as a whole.
Strategies for dealing with the crisis must have jobs and income protection as their central goals. Policies are moving
in that direction in Latin America and the Caribbean and, if they are effective, an even greater worsening of the situation
may be avoided.
Labour produces wealth, generates consumption, keeps economies functioning and is a key factor in seeking out the
way to more sustainable and equitable growth once the crisis is past.

The employment situation in Latin America and the Caribbean: Crisis and the labour market