The employment situation in Latin America and the Caribbean: Crisis, stabilization and reactivation: performance of the labour market in 2009 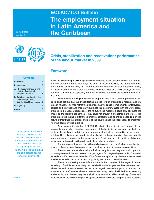 The employment situation in Latin America and the Caribbean: Crisis, stabilization and reactivation: performance of the labour market in 2009

Following a five-year period during which economic and social performance in Latin America
and the Caribbean surpassed anything seen in recent decades, the global economic
and financial crisis not only hurt macroeconomic variables but also impacted heavily
on labour markets in the region’s countries. Between 2003 and 2008 employment rates
had risen considerably, especially in the formal sector, but the crisis spelled a reversal of
this trend.
Nevertheless, the region was better prepared than it had been in previous crises,
since it had achieved a sound fiscal footing, a good level of international reserves and low
rates of inflation. This meant that the authorities had the space to implement countercyclical
policies on both fiscal and monetary levels. Be this as it may, faced with the worst global
crisis since the Great Depression of the 1930s, these measures could only attenuate the
impact on the region’s economies —they could not prevent it altogether. Furthermore, the
crisis struck with notable differences among subregions and countries depending on the
nature of their trade integration, and not all the countries had the fiscal space to implement
vigorous countercyclical policies.
As discussed in this third ECLAC/ILO bulletin, the crisis did less damage to the
region’s labour markets than had been feared at the beginning of last year, thanks to the
implementation of public policies geared towards employment, as reviewed in the two previous
bulletins. This bulletin offers an additional analysis from the perspective of gender equality.
Moreover, some countries in the region, notably Brazil, managed to rapidly stabilize and
revive economic growth, with positive effects on labour variables.
The fact remains, however, that millions in Latin America and the Caribbean lost their jobs
or were obliged to accept more poorly paid employment in more precarious conditions.
The macroeconomic data indicate that recovery is under way and is stronger and
occurring more rapidly than foreseen one year ago. In fact, regional growth in 2010 may well
exceed the 4.1% forecast at the end of 2009. Consequently, although the unemployment rate
may be expected to record a modest drop, it may not return to pre-crisis levels.
The upturn is taking many different forms in the countries of the region. In some,
especially in South America, recovery has benefited from the buoyancy of the Asian economies,
whose demand for natural resources has driven large increases in exports, in terms of both
volume and price. Countries whose economies are closely tied to the United States economy
are benefiting from the recovery there, albeit more slowly and with a certain lag. Conversely,
some countries are still suffering from major disequilibria, which are hampering their economic reactivation. Lastly, Chile and Haiti were both victims of devastating earthquakes early in the year and are therefore facing additional
challenges associated with reconstruction, on top of their efforts to sustain an economic upturn.
Despite the relatively favourable outlook for regional growth in 2010, great uncertainty still surrounds the global economy’s
recovery, which affects the region’s economic prospects over the longer term. The weakness of the recovery in some regions and
the doubts about its sustainability in others, as well as shocks that have occurred in international financial markets, are warning
signs which authorities need to monitor continuously because of the region’s close integration with the global economy.
In addition, a return to growth does not directly or automatically mean higher employment rates —still less decent working
conditions. Although some labour indicators have performed reasonably favourably since the end of last year, the countries still
face daunting challenges in improving the labour market integration of millions in Latin America and the Caribbean who are not
seeing the fruits of renewed growth. This is why it is important to learn the lessons arising from the policies implemented during
the crisis to offset its impact on labour markets.
With this third joint bulletin, ECLAC and ILO continue to pursue their objective of affording the region the information and analyses
needed to face these challenges, as regards both trends in the region’s labour markets and the corresponding policy options.