Home » Publications » The employment situation in Latin America and the Caribbean: Recovery of employment: towards a sustainable model
Available in: EnglishEspañol

The employment situation in Latin America and the Caribbean: Recovery of employment: towards a sustainable model 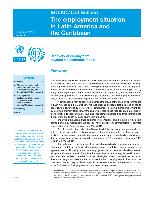 The adverse effects on Latin America and the Caribbean of the global economic and financial crisis, the worst since the 1930s, have been considerably less than was once feared. Although a run of growth was cut short in 2009 and regional output shrank by 1.9%, the impact of
the crisis was limited by the application of countercyclical fiscal and monetary policies by many of the region’s governments. The recovery in the economies, particularly in South America, has gone hand-in-hand with the rapid resurgence of the emerging economies of Asia, with all the favourable consequences this has had for global trade.
A similar pattern may be observed regarding the impact of the crisis on labour markets in Latin America and the Caribbean. Although millions of people lost their jobs or had to trade down to lower-quality work, levels of employment (including formal employment) fell by less than originally foreseen. At the same time, real wages rose slightly in a context of falling inflation. The labour market thus stabilized domestic demand, and this contributed to the recovery that began in many countries in late 2009.
Improved international trade and financing conditions, and the pick-up in domestic
demand driven by macroeconomic policies, have led different commentators to estimate growth in the region’s economy at some 6% in 2010.
As detailed in the first part of this edition of the Bulletin, the upturn has been manifested at the regional level by the creation of formal employment, a rise in the employment rate, a decline in joblessness and a moderate increase in real wages. Specifically, it is estimatedthat the regional unemployment rate will have dropped by 0.6 percentage points, from 8.1% in 2009 to 7.5% in 2010.
The performance of different countries and subregions has been very uneven, however. On the one hand, there is Brazil, where high economic growth has been accompanied by vigorous creation of formal jobs and the unemployment rate has dropped to levels not seen in a long time. Other countries in South America have benefited from strong demand for natural resources from the Asian countries. Combined with higher domestic demand, this has raised their economic growth rates and had a positive impact on employment indicators. On the other hand, the recovery is still very weak in certain countries and subregions, particularly in the Caribbean, with employment indicators continuing to worsen.Thus, the recovery in the region’s economy in 2010 may be characterized as dynamic but uneven. Growth estimates for 2011 are less favourable. The risks associated with the imbalances in the world economy and the withdrawal of countercyclical fiscal packages are likely to cause the region to grow more slowly in 2011. Accordingly, a small further reduction of between 0.2 and 0.4 percentage points in the unemployment rate is projected for 2011.
However, these indicators of recovery do not guarantee growth with decent work in the long term. To bolster the improvement
in labour market indicators and generate more productive employment and decent work, the region’s countries need to strengthen their macroeconomic policies, improve regional and global policy coordination, identify and remove bottlenecks in the labour market
itself and enhance instruments designed to promote greater equality.
Like the rest of the world, the Latin American and Caribbean region is also confronted with the challenge of transforming the way it produces so that its economies can develop along tracks that are sustainable in the long term. Climate change and the consequent challenge of developing and strengthening low-carbon production and consumption patterns will also affect the way people work. A great challenge ahead is to create green jobs that combine decent work with environmentally sustainable production patterns. From this perspective, the second part of this Bulletin discusses the green jobs approach, offering some information on the challenges and opportunities involved in moving towards a sustainable economy in the region and presenting a set of options for addressing environmental issues and the repercussions of climate change in the world of work.
Although the debate about the green jobs concept is fairly new in the region, examples already exist and a number of countries have moved ahead with the application of policies and programmes in this area. Costa Rica has formulated a National Climate Change Strategy, for example, whose foremost achievements include professional training in natural-resource management.
In Brazil, fuel production from biomass has increased and social housing with solar panelling is being built. A number of other
countries in the region are making progress in areas such as ecotourism, sustainable agriculture and infrastructure for climate
change adaptation, and in formalizing the work of people who recycle household waste.
The shift towards a more environmentally sustainable economy may cause jobs to be destroyed in some economic sectors and created in others. The working world will inevitably undergo major changes. If the issue is approached by way of social dialogue and appropriate public policies, there is a chance to use this shift to create more decent jobs, thereby contributing to growth in the economy, the construction of higher levels of equality and protection for the environment.

The employment situation in Latin America and the Caribbean: Recovery of employment: towards a sustainable model