The employment situation in Latin America and the Caribbean: Labour productivity and distribution issues 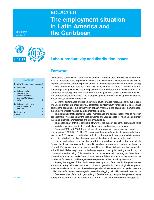 The employment situation in Latin America and the Caribbean: Labour productivity and distribution issues

Although the economies of Latin America and the Caribbean grew more slowly in 2011 than
in 2010, there were some improvements on the employment front. Workers benefited from the
region’s satisfactory economic performance in an increasingly complex international setting.
The unemployment rate fell from 7.3% in 2010 to 6.7% in 2011 thanks to a halfpercentage-
point gain in the urban employment rate. Both rates are at levels that have not
been seen for a long time. The proportion of formal jobs with social benefits rose as well,
and underemployment declined. The average wage and the minimum wage both increased
in real terms, albeit only moderately.
Economic performance and the employment situation varied widely among the subregions.
The unemployment rate dropped by 0.6 percentage points in South America but 0.4 percentage
points in the countries of the northern part of Latin America. In the countries of the Caribbean,
the employment rate was up by 0.2 percentage points.
The data show that substantial labour market gaps and serious labour-market insertion
issues remain. This is especially the case for women and young people, for whom unemployment
rates and other labour indicators are still unfavourable.
The second part of this report looks at whether the fruits of economic growth and rising
productivity have been distributed equitably between workers and companies.
Between 2002 and 2008 (the most recent expansionary economic cycle), wages as a
percentage of GDP fell in 13 of the 21 countries of the region for which data are available and
rose in just 8. This points to redistribution that is unfavourable to workers, which is worrying
in a region which already has the most unequal distribution of income in the world.
Underlying this trend is the fact that, worldwide, wages have grown less than productivity.
Beyond the ethical dimension of this issue, it jeopardizes the social and economic sustainability
of growth. For example, one of the root causes of the recent financial crisis was that households
in the United States responded to declining wage income by borrowing more to pay for
consumption and housing. This turned out to be unsustainable in the long run. Over time, it
undermines the labour market’s contribution to the efficient allocation of resources and its
distributive function, too, with negative consequences for democratic governance.
Among the triggers of this distributive worsening most often cited in the global debate
are market deregulation and its impact on financial globalization, technological change that
favours capital over labour, and the weakening of labour institutions. What is needed here is a
public policy effort to help keep wage increases from lagging behind increases in productivity.
Some countries of the region, especially in South America, saw promising developments
during the second half of the 2000s in the form of a positive trend reversal in wages as a percentage of GDP. One example is Brazil, where a minimum wage policy tailored to the dynamics of the domestic market is
considered to be one of the factors behind an upturn in the wage share of GDP.
The region needs to grow more and better. Productivity must grow at a steady pace, to serve as the basis for sustained
improvements in the well-being of the populace and to narrow the gap between the economies of Latin America and the Caribbean
and the more advanced economies. And inequality must be decreased; this could be achieved by closing the productivity gap
between upgraded companies and the many firms whose productivity is low.
As set out in this report, the region made some progress between 2002 and 2010, with labour productivity rising at the rate of
1.5% a year. But this progress falls short of that seen in other regions such as Sub-Saharan Africa (2.1%) and, above all, East Asia
(8.3%, not counting Japan and the Republic of Korea). Moreover, in many of the countries of the region these gains have not been
distributed equitably. Therein lies a dual challenge that must be addressed: continue to increase productivity while enhancing the
mechanisms for distributing gains in a way that will encourage investment and boost worker and household income.
The Economic Commission for Latin America and the Caribbean (ECLAC) and the International Labour Organization (ILO)
estimate that the pace of economic growth in the region will be slightly slower in 2012 than in 2011, in a global economic scenario
marked by the cooling of several of the main economic engines and a high degree of uncertainty concerning, above all, prospects
for the euro zone. The region is expected to continue to hold up well to this worsening scenario, thanks to policies that leveraged
more favourable conditions in the past. This will be felt in the labour markets, as well, so expectations are that unemployment will
edge down by as much as two tenths of a decimal point.