Foreign direct investment in the Caribbean: Trends, determinants and policies 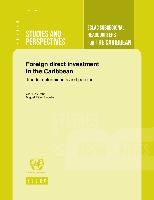 Foreign direct investment in the Caribbean: Trends, determinants and policies

The Caribbean receives some of the highest levels of Foreign Direct Investment (FDI) in the world, with
many economies having FDI to GDP ratios above 10 per cent in 2012. In the recent past, FDI flows have
been particularly volatile, with the financial crisis in 2008 greatly reducing FDI flows to the Caribbean,
although they have recovered somewhat recently. One of the distinctive features of Caribbean FDI flows
is that they appear to be relatively unprofitable, with FDI income significantly lower than in Latin
America. This is possibly due to the sectoral pattern of FDI, which in most Caribbean economies is
heavily slanted towards services, particularly tourism. In a small number of economies, natural resources
play an important role, which requires relatively large capital outlays and is thus responsible for a large
share of investment. While the United States used to be the most important investor in the region,
nowadays other players, such as Canada and China, are also taking a keen interest. Finally, the report
studies the use of FDI promotion policies. These are more extensive and prevalent in the Caribbean than
elsewhere, but the evidence of their effectiveness to improve either FDI flows or the impact of such FDI
flows on the local economy, is limited.