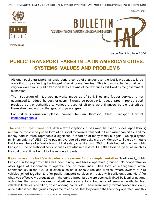 Although public transport has undergone a series of changes over the last few decades, fares are still strongly affecting the budget of low-income families. This is despite the fact that, with very few exceptions, public transport fares are one of the few prices still fixed by the government authorities. The introduction of integrated networks made up of trunk lines and feeder services is not guaranteed to reduce the cost for users. It would be possible to reduce fares if free transport provided by the authorities to various groups of citizens were financed by the authorities themselves, and not by other groups of passengers.