Home » Publications » The Rights of Indigenous Children
Available in: EnglishEspañol

The Rights of Indigenous Children 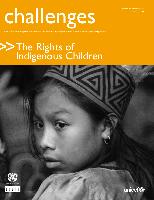 While children in general are overrepresented among those living in poverty, a long history of discrimination and exclusion has ensured that indigenous children in Latin America and the Caribbean are in an even worse position. In the general population 63% of children aged under 18 years live in poverty, as measured by privation of the basic rights to well-being; however, that figure is as high as 88% among indigenous children in the same age group. This is a violation of these children's rights —including their rights to survival and development— and entails high costs for society in terms of productive capacity and social inclusion. That is the thrust of the argument in the central article of this issue of Challenges, which focuses on poverty among indigenous children. The data show a pattern of inequality that is highly detrimental to indigenous children: they make up a disproportionate number of those living in extreme poverty and are three times more likely to lack access to education, safe drinking water and housing than other children. It is a matter of particular concern that in the countries of the Andean Community 5 of every 10 indigenous children under the age of 5 years suffer from chronic malnutrition.This edition includes brief testimonies by indigenous children as to what their life is like; an interview with Marta Maurás, Vice-Chairperson of the United Nations Committee on the Rights of the Child, on the international mechanisms in place to safeguard the rights of indigenous children; and, lastly, an article on the Uantakua programme in Mexico, which uses information and communication technologies in bilingual schools with large indigenous populations.

Children and international migration in Latin...
Child abuse: a painful reality behind closed doors
Rights of children and adolescents with...
Reduction of infant mortality in Latin America...

The Rights of Indigenous Children