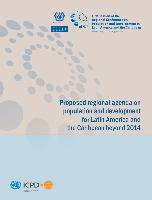 This document aims to identify and propose priority issues and approaches for the population and development agenda for Latin America and the Caribbean beyond 2014. The proposal is based on the review of the current situation and outlook regarding important economic, social and demographic dimensions in the region, and takes into account the main guidelines contained in the global and regional proposals for the adoption of a strategic agenda for sustainable development beyond 2015. The document is divided into three chapters. Chapter I provides relevant background information and sets forth the objectives and scope of the proposed regional agenda on population and development for Latin America and the Caribbean beyond 2014. Chapter II has two sections: the first gives an account of the economic and social context, including factors associated with global processes, principally globalization, the economic crisis and the region's international position in the global economy in the medium and long terms. It also discusses some particular features of the region, in particular, persistent inequality in multiple dimensions, including territorial and cultural heterogeneity and differences between population groups, and the role of these factors in perpetuating poverty. At the same time, attention is drawn to the positive experiences the countries have had and the key role played the State in the recent achievements in this regard, highlighting the need to reposition the State and strengthen its capabilities with greater vigour. The second section discusses the need to include the region's demographic context, including recent trends and projections of demographic components, and the impacts and challenges facing States in the medium and long terms, not only in the population and development agenda, but also in the agenda for development with equity. Chapter III sets forth the human rights approach underlying the proposal for the regional agenda on population and development, proposes a selection of priority issues on the basis of the contexts described, including, for each, the rationale, key messages and actions that could be included on the population and development agenda and, lastly, refers to a number of frameworks and mechanisms which are needed to implement a regional agenda on population and development..