Concentration in liner shipping: its causes and impacts for ports and shipping services in developing regions 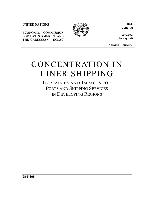 Concentration in liner shipping: its causes and impacts for ports and shipping services in developing regions

Abstract Concentration in liner shipping means that relatively larger shipping companies are increasing their market share at the expense of the remaining smaller players. Although this process is not new, it has gained strength and is particularly affecting ports and shipping services in developing regions. Because trade is growing as a proportion of world GDP, governments and international organizations attach an increasing priority to improving ports and shipping services. This leads to deregulation, which, together with technological advances, increases the incentives for shipping companies to form alliances and to merge. Another cause of the process of concentration is technological change, which has led to an increase of fixed costs as a proportion of total average costs. This leads to larger optimum unit sizes of vessels, ports, and companies, which in turn reduces the number of participants in the long-term market equilibrium. To analyse the impacts of these trends, the document examines the following issues: the extent to which economies of scale are being realized; possible declines in liner shipping companies' profits; the danger of overcapacity; fluctuations in freight-rates; the strength of alliances; the expansion of east-west carriers into north-south markets; the increasing proportion of trans-shipped containers; ports as trans-shipment centres; options for small liner operators; benefits for importers, exporters and consumers; and the implications for regulatory bodies. The document presents a generally positive picture. The word concentration might initially raise the issues of abuse of market power and monopoly rents, but importers, exporters, consumers, ports, and major east-west carriers are all likely to gain from the described process. The ones that are most likely to lose are traditional north-south liner shipping companies. It would, however, be a costly misconception of competition if the public sector tried to protect smaller players from its consequences.