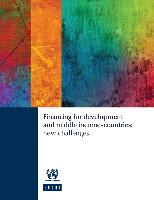 A criterion commonly used to classify countries, including by the donor countries of the Development Assistance Committee (DAC) of the Organization for Economic Cooperation and Development, focuses on income per capita as the main factor for defining groups of countries.

Classifying countries according to income level ties in with the idea that countries should assume responsibility for their own development after reaching a certain income level (a process known as "graduation"). However, there are many important consequences of using arbitrary income boundaries to define categories.

First, and this is especially true for borderline countries, graduation may simply be triggered by marginal changes in economic conditions, but it can lead to important changes in the development assistance environment, including the amount of assistance delivered and the conditions -greater or lesser concessionality- in which that assistance is delivered.

Second, the process of graduation into the next higher income category is not a linear one, with countries often slipping back into a previous income status. This is another reflection of the fact that graduation may not be a sign of fundamental changes in a country's development reality but simply of marginal changes in economic conditions.

Finally, and most importantly, using income thresholds leads to country groupings that do not capture the complex nature of development and the diversity of situations among and within the members of each group. In particular, middle-income countries (MICs) -considered as a group- constitute an essential pillar of the world economy, they account for a large share of economic activity and trade, and they are home to a majority both of the world's population and of the world's poor. However, a closer look inside the group reveals striking heterogeneity among the various individual countries. The wide range of capacities and needs among MICs is not taken into account when countries are grouped simply by income level.

In Latin America and the Caribbean, almost 90% of countries fall in the middle-income category. The disparities across these countries are found in a wide range of variables relating not only to size and economic conditions but also to social situation and structural features linked to development potential and productive performance.

This broad diversity of capacities and needs among MICs is, however, seldom taken into account by donor countries and multilateral agencies when prioritizing the allocation of official development assistance (ODA). The rationale for ODA allocation in recent decades has been to channel the bulk of ODA towards low-income countries, including those classified as least developed countries (LDCs), to the detriment of MICs. The thinking is that since MICs have higher average incomes, their needs should be less.

For a middle-income region such as Latin America and the Caribbean, this has meant that its share of ODA flows fell from an already low 9% in 1990 to an even lower 7% in 2009, compared with Africa and Asia which receive the most substantial share (37% and 30% respectively).

Although it is to be expected that the international system of cooperation should focus on levelling the playing field for low-income economies and narrowing their development gap with respect to the more advanced countries, international cooperation mandates should not be limited to that focus. International cooperation should search for a comprehensive and broad-based response to the development problem, one that not only addresses the needs of low-income countries but also considers the diverse needs and kinds of vulnerability present in MICs.

For this, it is vital to have a comprehensive understanding of where the major needs and areas of vulnerability lie in each case and where the main gaps are between needs and possibilities so that development assistance may be allocated accordingly.

A crucial step forward in this direction would be the revision of the criteria used for country classification and the substitution of the currently used income-based criteria with new, better-suited indicators. These new indicators should be able to capture the multifaceted nature of development and thus lead to country groupings that are less heterogeneous internally.

More specifically, these indicators should reflect structural challenges and areas of vulnerability that are present in MICs but not captured by income per capita thresholds. In the case of Latin American and Caribbean MICs, these traditional long-term challenges and areas of vulnerability can be summarized in what the Economic Commission for Latin America and the Caribbean identified as key gaps that must be closed in order to avert the "middle-income trap" and move towards a sustainable and dynamic development process that places equity at its centre (ECLAC, 2010a). Those gaps are the financing gap, the inequality and social protection gap, the human capital gap and the productivity and investment gap.

Besides developing better criteria for ODA allocation, the international community must persist in the effort to increase the resources available for development financing. The current level of ODA financing provided to developing countries is clearly insufficient; and as a result, increases in assistance to some countries or regions sometimes occur at the expense of others (such as some MICs) that also have important needs.

Despite efforts by DAC donor countries to increase the amount of ODA provided, the levels in 2010 stood at only 0.32% of GNI on average, far behind the internationally agreed target of 0.7%. In addition, the public finances of many donors deteriorated substantially in the wake of the global crisis, making the scaling up of development assistance levels less likely. As the post-crisis scenario has added new areas of vulnerability to the traditional ones faced by some developing countries, the tension will persist between scarce resources and vast needs.

It is therefore of vital importance that the international community pool efforts to come up with innovative ways of mobilizing resources for development that supplement -not replace- ODA flows. Countries of both the northern and southern hemispheres have joined forces on different occasions to develop innovative finance for development mechanisms. The proposals range from specific types of global taxes to mechanisms that facilitate private, person-to-person voluntary donations. Some of these proposals are already being implemented and the results are encouraging. Nevertheless, much remains to be done in this area and the international community should invest seriously in efforts to that end.