The People's Republic of China and Latin America and the Caribbean: towards a strategic relationship 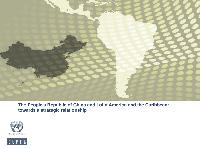 The People's Republic of China and Latin America and the Caribbean: towards a strategic relationship

This publication is a contribution of the Economic Commission for Latin America and the Caribbean (ECLAC) to the analysis of the implications for regional development represented by a growing relationship with China. In 2009, when the world faced its worst economic crisis in eight decades, China consolidated its position as a key player in the global economy. While the world as a whole and the industrialized countries experienced economic declines of 0.8% and 3.2% respectively, China managed to grow by 8.7%. This was possible thanks to a giant economic stimulus package, accompanied by a tremendous credit expansion. Moreover, in the context of a sharp and widespread decline in world trade flows (12.2% in volume), China replaced Germany as the world's largest exporter of goods. In this publication, we briefly review the recent evolution of trade between China and the region, in terms of countries, sectors and products, as well as Chinese Foreign Direct Investment (FDI) in Latin America and the Caribbean. From this analysis we confirm the role that China has been taking in recent years as the main contributor to the region's export growth, including in the context of a severe slowdown that exports suffered in 2009. It also confirms the essentially inter-industry nature of trade between the region and China, in which China's exports consist mainly of manufactured goods, while those of Latin America and the Caribbean are mainly raw materials. This complicates greater Chinese-Latin American business alliances as well as a more effective integration of the countries of the region in Asia-Pacific's productive chains, which are increasingly intra-industry in character. This publication presents recent foreign trade developments in the region, broken down by origins and destinations and product groups, and in terms of both value and volume. Therefore, it updates the analysis contained in the document: Latin America and the Caribbean in the World Economy 2008-2009", published in August 2009 by ECLAC. China represents a source of enormous opportunities for the region. Fully taking advantage of them will require progress in export diversification, through a deliberate and sustained effort to incorporate in them more value. An additional challenge of the utmost importance is to ensure higher levels of Chinese FDI in the region, especially those that contribute to improving infrastructure, promoting export diversification, and boosting Chinese-Latin American business alliances. All of the above requires progress in the region's strategic approach towards China to overcome the limitations typical of the national efforts that have prevailed so far. For a number of years, ECLAC has been following and supporting the efforts being carried out in various forums in support of strengthening economic relations between Latin America and the Caribbean and the Asia-Pacific region, especially China. It has participated in all three meetings of the China-Latin America Business Summit, as well as in the four ministerial meetings of the Latin America Pacific Arc Forum Initiative, among others. This publication is part of this ongoing effort to foster links between Latin America and the Caribbean and the world's most dynamic region, Asia-Pacific."