Home » Publications » Economics of climate change in Latin America and the Caribbean: summary 2009
Available in: EnglishEspañol

Economics of climate change in Latin America and the Caribbean: summary 2009 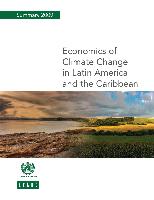 Global climate change, which is associated basically with increases in the average temperature, changes in precipitation patterns, rising sea levels, the reduction of the world's ice masses and snow deposits, and the modification of extreme weather patterns, is one of the major challenges facing humankind this century. Its impacts on economic activities, populations and ecosystems are undoubtedly significant and in many cases irreversible. The challenge of simultaneously adapting to new climatic conditions and participating in an international mitigation strategy will entail costs of such a magnitude that climate change will heavily condition the nature of economic development in the decades ahead.The socio-economic, institutional and geographical features of Latin America and the Caribbean make climate change a particularly pressing issue in the region. The acute sensitivity to climate shifts of some of its economic activities, such as agriculture and tourism, the potential loss of biodiversity or of human life or even the exposure to extreme weather events show how important it is to conduct an economic analysis of climate change in order to construct a sustainable long-term development strategy that is based on sound science and backed by broad social consensus. The global scope of climate change, its impact as a negative factor in economic development, the high levels of uncertainty surrounding the subject and the need for an effective risk management scheme are fuelling a heated debate encompassing the ethical aspects and equity, the size of the phenomenon across different periods of time, the channels through which the damages are transmitted, the economic costs involved and the best options for confronting them. This document presents an aggregate economic analysis of climate change in Latin America and the Caribbean based on the national studies carried out on the topic in the region. It summarizes the results obtained and examines certain topics in detail. The conclusions are still preliminary; they seek to enhance understanding of the economic dimension of climate change and contribute to the search for possible solutions. This study was carried out during a relatively short timeframe in close collaboration with the Governments of Denmark, Germany, Spain and the United Kingdom, as well as with the European Union and Governments of countries in the region, the Inter-American Development Bank (IDB), the Global Mechanism of the United Nations Convention to Combat Desertification and a broad network of academic and research institutions. Responsibility for the economic estimates presented herein, however, should be wholly attributed to the authors and not to the aforementioned institutions.The national studies reveal the diversity of the situations present in the region, as well as the richness and intensity of the debate surrounding the topic. They also spell out the significant, non-linear economic consequences of climate change in the region, which vary according to each country's socio-economic conditions. Furthermore, failure to tackle the issue is shown to be gradually turning into an additional limitation on economic growth. These analyses have generated new information and new capacities in the countries of Latin America and the Caribbean; the next step is to establish a forum for ongoing research and dialogue on the economics of climate change.In the twenty-first century, the economies of Latin America and the Caribbean will have to take on the challenge posed by climate change, including the costs of adaptation and mitigation. They will simultaneously have to address other outstanding issues, such as sustained economic growth, job creation and poverty reduction. The region moreover faces the paradox of being a minimal contributor to climate change that nevertheless suffers a sizeable proportion of the worst consequences; yet its position would be made much more vulnerable by failure to engage in mitigation efforts within the framework of multilateral agreements entered into with the problem's greatest begetters. International agreements on the topic must recognize the different levels of development and asymmetries between the countries or regions that most contribute to climate change through their GHG emissions and those that suffer the worst consequences. Designing proposals and strategies to tackle climate change should not be seen as running counter to the pursuit of economic growth. Solutions to the problems that climate change poses will be attainable only within a fair multilateral international agreement that acknowledges not only the global scope of the issue and the shared responsibilities involved, but also the historical differences between countries and provides for additional financial resources to be made available for tackling the challenges of mitigation and adaptation in the developing countries. Unilateral actions that curb existing flows of funding and access to additional financial resources are not long-term solutions and will only exacerbate the region's problems.The private sector, the public sector and citizens in general must in their own ways actively contribute to the adjustments that will have to be made to secure a more viable future. Innovative solutions to the problems brought about by climate change will involve redirecting the economy towards low-carbon growth that is compatible with sustainable development. The atmosphere must be viewed as a public good and its preservation for future generations as an ineluctable duty of the generation of today. he countries of Latin America and the Caribbean must build their future on the action of the present and seize the opportunity to improve quality of life and move towards a more sustainable pattern of development. The United Nations Conference on Climate Change (Copenhagen, 2009) represents an invaluable opportunity for the international community to formulate an inclusive, fair and equitable strategy in which the exercise of the precautionary principle can prevent irreversible damage. At the same time, fundamental development problems persist in the region, and these need to be tackled hand in hand with those arising from climate change.

Climate Change and Development in Latin America...
Sustainable development 20 years on from the...
Latin America and the Caribbean in the World...
The current international context and its...