The millennium development goals: a Latin American and Caribbean perspective 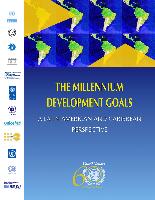 Foreword In September 2000, 147 heads of State and Government, together with 42 ministers and heads of delegation, gathered at the General Assembly of the United Nations to explore ways of pooling their combined will and efforts to revitalize international cooperation on behalf of the less developed countries and, in particular, to mount a frontal assault on extreme poverty. On that occasion they identified goals for their efforts to combat poverty and hunger, reverse environmental degradation, achieve improvements in the fields of education and health, and promote gender equality. It also became clear that, because the lack of development is a problem that concerns the entire world, the formation of a partnership to enrich and reinvigorate international cooperation while at the same time honing it and increasing its effectiveness should be one of the eight Goals. These deliberations thus gave rise to what came to be known as the Millennium Development Goals. The Goals are underpinned by the comprehensive approach to development framed by the agreements reached at world summits held by the United Nations in the 1990s. They are derived from the Millennium Declaration, which is even broader in scope and proposes that action be taken to build consensus in such crucial areas as peace, security and disarmament, human rights, democracy and good governance, and means of strengthening the United Nations. Every effort was made to express the Goals as clearly as possible, and specific targets were set for the progress to be made by 2015 in relation to the major economic and social issues involved in meeting the Goals. The countries also agreed to review the progress made towards the Goals on a regular basis in order to ensure that efforts to attain the Goals would not fade as time went on. We are nearing one of the milestones in that follow-up process, as the General Assembly will undertake such a review in September 2005. To facilitate its work, on 21 March the Secretary-General of the United Nations submitted a report entitled, In larger freedom: towards development, security and human rights for all". (1) In that report, after recalling the problems that have hindered efforts to build a common future for all the world's peoples, the Secretary-General noted that: "We need to see the Millennium Development Goals as part of an even larger development agenda. While the Goals have been the subject of an enormous amount of follow-up both inside and outside the United Nations, they clearly do not in themselves represent a complete development agenda. They do not directly encompass some of the broader issues covered by the conferences of the 1990s, nor do they address the particular needs of middle-income developing countries or the questions of growing inequality ...". The countries will also have before them the report submitted to the Secretary-General by the Millennium Project. In addition to these two documents, the representatives of Latin American and Caribbean countries will have the benefit of an in-depth survey of progress and specific concerns in the region. This more comprehensive analysis will facilitate their task of ensuring that the Latin American and Caribbean countries' views are accorded due consideration in the deliberations of the forthcoming General Assembly. That survey is presented is this report. This is not the report's only purpose, but it is surely its most immediate aim, and all the international organizations working in the region have pooled their efforts in order to prepare it. The secretariat of ECLAC has had the honour of coordinating those efforts, which have been directed towards providing a systemic, integrated perspective on the situation which is shared by all the relevant bodies. The following pages contain a description of how these international organizations went about preparing this report and what the outcome of their work has been. The purpose of this explanation is to clarify the method used to identify and quantify the progress made by the Latin American and Caribbean region and the challenges that remain to be met. The analysis also looks at the differences across countries in terms of their chances of attaining the Goals and, wherever possible, the differences between trends in various segments of the population (classified by gender, ethnic group, age group, place of residence and income stratum) as a means of helping to pinpoint the areas in which efforts must be redoubled in order to ensure that advances are of benefit to all. This is supplemented by an integrated analysis of macroeconomic (including fiscal) factors as they relate to the Goal of eradicating poverty. The member organizations of the United Nations system that helped to prepare this document are confident that it will prove valuable for national authorities and for representatives of international cooperation agencies, as well as for civil society and non-governmental organizations. In fact, we believe it will be of interest to all those who are committed to increasing the well-being of the region's peoples, to whom the Millennium Declaration promises not only to revitalize international cooperation but also to rekindle the hope of eliminating extreme poverty once and for all and shaping a more just and secure world. José Luis Machinea   Executive Secretary Economic Commission for Latin America and the Caribbean (ECLAC) 1 A/59/2005."